On the Borderlands of Great Empires, Transylvanian Armies 1541-1613. 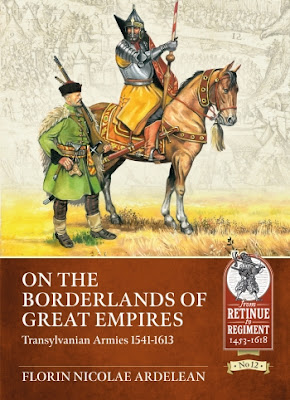 In the absence of any recent games or finished troops to share here is another book review. I have to say this one is a tremendous read and I feel privileged to be in a position to share my thoughts on yet another Helion publication.

Florin Ardelean’s ‘On the Borders of Empire, Transylvanian Armies 1541-1613’ could arguably be catering for an especially niche audience in the English-speaking world, but I think I would disagree. The wars against the Ottomans during this period seem to attract a pretty high level of interest, myself included. Helion have added yet another cracker (as if that could even be thought possible) to their ‘Retinue to Regiment’ series.

The Principality of Transylvania was born out of the collapse of the Kingdom of Hungary, and the Eastern half of the defunct kingdom rose out of the ashes to become a distinct independent state and a major player in the never ending wars between the Ottomans and the Hapsburgs between 1541 and 1691.

The author describes how the rulers of Transylvania were able to organise and defend their newborn country from its inception until 1613. The book starts with an excellent and detailed account of the birth of the Principality, including descriptions of the key personalities involved and the different strata of society, from the nobility down to humble peasant.

The following chapters provide a fascinating insight into the organisation and composition of the Transylvanian army, details of the numerous fortifications and lastly an account of the numerous campaigns, battles and sieges that took place during the period covered by the book. This last chapter is excellent and gives an interesting insight into several of the key battles that helped shape the Principality and an analysis of how changes in the ‘Art of War’ influenced the army and the Sate.

It goes without saying that the book is lavishly illustrated with numerous mostly contemporary black and white images, several really helpful maps (including several of the battles) and the usual splendid colour section of eight pages of specially commissioned plates depicting the various troop types to be found in the armies campaigning in Transylvania. These are some of the best illustrations I’ve seen in a while and if I had the space I’d without doubt have some of them on my wall.

Overall then, an excellent book, well written, introducing us to a fascinating and somewhat obscure subject not until now easily accessible to Anglophone readers. I’d recommend it highly.
By Colin Ashton - April 28, 2022