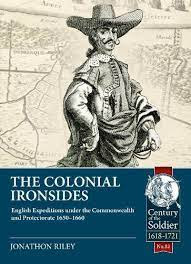 Devotees of all things from the Commonwealth and Restoration period of British history will be pleased to see this book The Colonial Ironsides, English Expeditions under the Commonwealth and Protectorate, 1650 - 1660 by Jonathon Riley. This book joins several previously published Helion books covering this era, two volumes on the Anglo-Spanish War 1655-1660 and the author’s own The Last Ironsides, gives us a wealth of information on a fascinating yet somewhat obscure subject.

This book provides a fascinating account of a less well known and studied decade of military operations, the results of which helped shape Britain’s future for centuries to come. Chapters include operations against the remaining Royalist holdouts in the Scilly Isles, the Channel Islands and the Isle of Man, and campaigns against the Spanish in the Caribbean and the Dutch in New Amsterdam to mention a few examples. Also important to the scope of this book are the Commonwealth’s campaigns in Europe, including the Battle of the Dunes and the siege and occupation of Dunkirk. I particularly liked the chapter describing the formation and operations of the Royalist army in exile of Charles II as he struggled to gain support for an attempt to invade and regain his father’s crown.

All of these campaigns are examined in great detail, and provide the reader with a wealth of information on such things as the leaders, political aims, the troops and ships involved, lots of potentially ‘heavy’ stuff which is in fact described quite clearly and fluently. Each chapter has its own dedicated appendix following directly on rather than all being at the of the book. It’s a different approach and one that in my opinion works well for this book given the vast amount of information being provided.

The book is very well provided for in terms of detailed and helpful maps of the theatres of war, many which being reproductions of contemporary prints. There are also a significant number of contemporary black and white images and numerous tables detailing the men, units and ships involved in each campaign.

To sum up, yet another highly recommended Helion masterpiece to fill a space on the bookcase. Readers ought not be disappointed in this excellent book. I wasn’t.