A bit of a challenge on Saturday, when I exposed the guys to something largely outside most of their comfort zones, the 1939 Winter War using Great Escape Games' excellent Iron Cross ruleset with some period specific amendments which I know worked fine last time I played. Ultimately there were seven of us; Paul, Shaun and Nigel were the Finns and Dave, Conrad, Neil and John were the Soviets. I tried to remember the rules and umpired/hosted. The figures are a mixture of 1/72 scale metal castings and Strelets plastics. Most of the vehicles and AFVs were 3D prints (several by me) or Early War Miniatures, Minirons or Pegasus. All the terrain is mine, much of the wooded and broken ground areas I made myself; the exception being some 'winter copses' I picked up off Andy at Last Valley. This game was a bit of a risk as, (a) I wasn't totally up to speed with the rules, (b) most players were not 'into' twentieth century wargaming so might have struggled a bit tactically and (c) with hindsight I hadn't prepared enough for the game beforehand. I knew what the troops represented but the players were confused. Ah well, I shall colour code them all for the next game, the troops that is, not the players, although.......?

I will do the usual and run through some photos of the action with explanations as and when I feel necessary and/or can remember. I think they're all in the correct order.....and trust it all makes more sense to the readers than it did to me and some of the players! 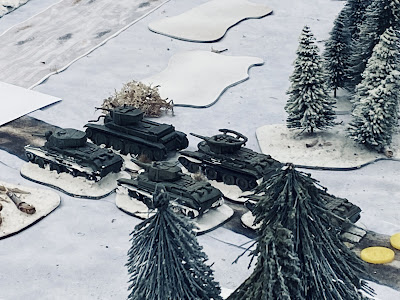