From the Atacama to the Andes - a Review 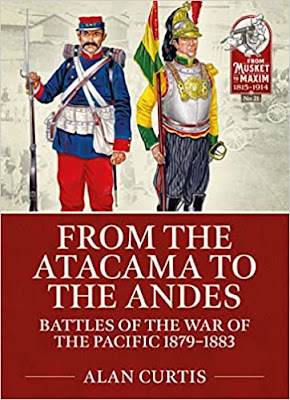 FROM THE ATACAMA TO THE ANDES. Battles of the War of the Pacific 1879-1883 by Alan Curtis is No. 21 in Helion’s excellent and incredibly diverse ‘From Musket to Maxim’ series. The author has spent 40 years researching the Pacific War so he should know his subject, and he has used English and Spanish language sources when conducting his research. This war is definitely a rather niche subject but I would not be surprised if this book stirs up a massive amount of interest thus raising the profile of this little known (in the English speaking world at any rate) and brutal war between Chile on one side and the Bolivians and Peruvians on the other.

After a brief introduction setting the scene and a good look at the armies of the warring nations the book launches straight into the war with a serious breakdown and analysis of the campaign and all the battles on land and sea, in an impressive amount of detail, right down to a very personal level. Naval operations are the only aspect of the fighting that I knew something about, but my knowledge on the subject has now been expanded considerably. It could be said that the amount of information contained within this book is such that absorbing it is like being repeatedly hit on the head…..but in a very good way!

The chapters I found most useful are towards the end of the book, ‘Organisation of the Armies’ and ‘Uniforms’, and I am sure the same would be said of any war gamer reading them, as after reading the book I found I had another itch to scratch in terms of future projects. I was also very pleased to see a chapter providing details of all the combatants’ major warships. Having this all in one place is very helpful when cross referencing the naval operations to check on ship capabilities.

The colour illustrations are lovely and well crafted, depicting examples of Bolivian, Peruvian and Chilean troops, in all their glory in the case of the Bolivian Cuirassier regiment, to the rag tag uniforms eventually worn by most of the men from all three armies as their pre-war uniforms wore out. In addition to the colour uniform plates there are some excellent, and for war-gamers rather useful, colour maps showing some of the main land and sea battles. The book is of course laced with numerous contemporary black and white images, many of which are photographs of officers and men from the war who may or may not have survived the conflict. It is some to reflect on perhaps?

The book concludes with a whole series of detailed appendices, giving the reader an impressive amount of information on orders of battle for the major engagements and casualties for each of the three armies.
It comes as no surprise then that I wholeheartedly recommend this book and I can think of at least one person not a million miles away who will love it.
By Colin Ashton - May 25, 2022