Back to the Late Roman Campaign with a Bang!

After a suitable break to ensure among other things that we didn't get sick of too many ancient games and also to give the best chance that many of us would forget the rules, there was a battle to fight, between the Emperor Digito, supported by Jazzeric of the Ostrogoths, against Rufus Johannes' loyal (to whom?) army which was marching on the capital of Praesidium Gehenae from the north east while Paulinus Germanicus marched towards the capital from Maluscastra and the south east. Digito had been well placed to intercept isolated Rufus' army so attacked, supported by his allies the Ostrogoths from the still smouldering ruins of Tabularasa.

Richard (as the 'Emperor' Digito) was joined by Dave (Jazzeric), Shaun and Nigel, and they faced John (Rufus), Paul, Conrad and Neil. Neil also did must of the rules bashing while I adjudicated where appropriate. We were using the excellent Sword and Spear rules. Richard drew his army from the Foederati Roman list while John’s was from the Late Roman one. I don’t normally do army lists but the revenues each player receives each month translates into points for the army.

Both armies were very large so I scaled them down by a third to fit on the table (and even I don't have THAT many legions in my collection!) Both armies deployed fairly traditionally, infantry in the centre and cavalry on the wings. Digito ordered Jazzeric to conduct a flank march with his Ostrogoths so these troops, one third of his army, were not immediately available.

John went straight for the jugular and the entire army advanced rapidly towards the enemy. Paul's command raced ahead, supported on its left flank by Neil's cavalry. John's command advanced to maintain contact with Paul in the centre and Conrad's right wing cavalry did likewise, keeping station on John's right flank. By sharp contrast few of Richard’s units even managed to activate this turn, which meant the army was in danger of being crowded off the table. As usual I hope the following photographs (hopefully in something resembling the right order) and narrative will give a good account of how the battle developed. Read on.....

The following pictures give an idea of how the game played out, but they may not be quite in the correct order. 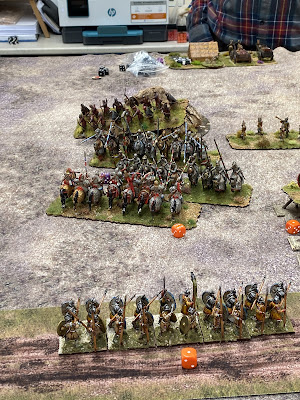 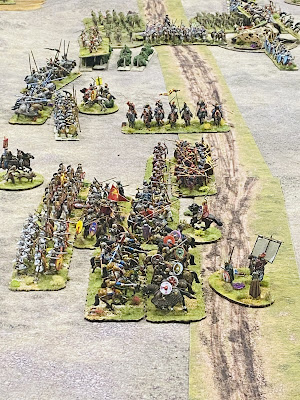 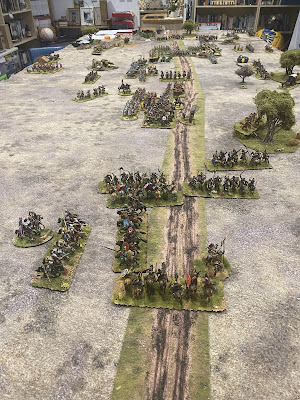 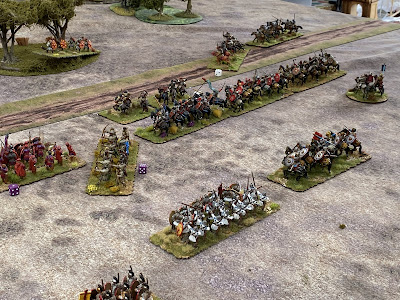 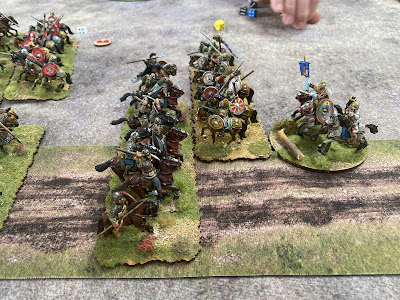 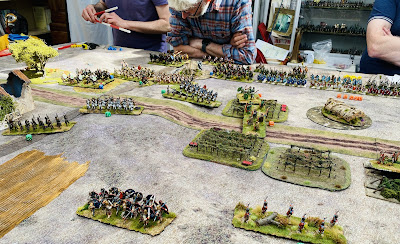 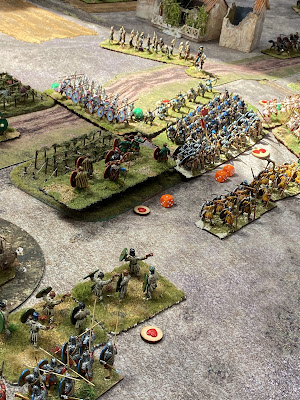 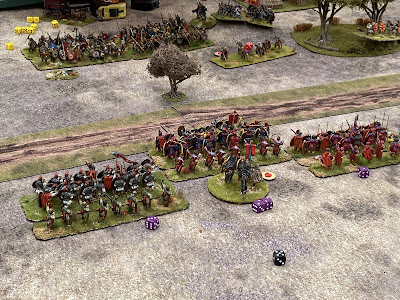 This rather large and somewhat confusing game ended with a clear victory for Johannes and the second defeat (regardless of spin) in a row for Digito. How long can he hang open to power? When will his legions have had enough? It was they who proclaimed him emperor so has he met their expectations? [I doubt it somehow]. Something to consider for the campaign.

It was a thoroughly enjoyable game to oversee and the outcome will translate into a nice bit of narrative for the next edition of the Asienus Gladiator. Basically Digito's right wing collapsed under the pressure from Neil's cavalry and the centre command had also broken and was forced to leave the field, and it all happened very quickly. The poor Ostrogoths were a bit of a damp squib but that's just down to some unfortunate dice scores when determining if and when they arrived.

It was a particularly sanguine battle, with both armies loosing over one third of their forces (when translated back into points). The Ostrogoths were the worst off with almost half of their army destroyed.  Richard's army retreated back towards the capitol of Praesidium Gehenna, to regroup and then face the forces of Paulinus Germanicus approaching from the south. John's army took possession of the field and the enemy camp (gaining some loot points for the coffers was very helpful).

Next time these figures are on the table in a couple of week's time I am hoping to stage the Digito versus Paulinus confrontation.