It must be well over a year since I had any of my French Revolutionary Wars collection on the table so last Saturday men were recalled to barracks and mobilised to have another game using the new Soldiers of Napoleon rules. Richard, Paul and Conrad have played a couple of times since I put on the War of 1812 game a couple of weeks ago so between us we had a much better idea of how to use them. 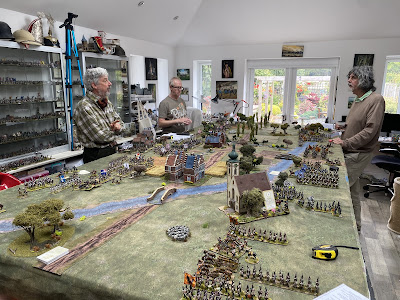 For this game set in 1794’ish, the French Army of the Moselle under Lazare Hoche facing the Austrian Army of the Rhine under Gen de Kavellerie Wurmser. Still no sight of Napoleon anywhere. The orders of battle were adapted from a game we played three or maybe four years ago when we did Wissembourg (not the 1870 version). The French, commanded by Conrad and supported by John and Nigel were a hodgepodge of former royalist regular battalions and lots of volunteer and levy battalions of dubious quality that I classed as militia under the rules. The Austrian force included a brigade of Bavarians (‘cos I have some) and another of French Emigres. Both the latter two brigades were militia quality bar one tenuously better Emigre units. The Austrians were commanded by Paul, ably supported by Richard and myself (my second game, actually playing, in a row; what is the world coming to?). We had a plan which involved demonstrating on the right and in the centre while attacking on the left with the grenadiers supported by two batteries of heavy cannon. I don't know about the French plan, although I'm sure they had one.

Anyway, it was a simple encounter battle to further test the rules. Each side had seven brigades in three divisions. One brigade each had to be held back as a reserve to hopefully appear from turn 3 onwards. For those not familiar with these rules, they are card driven and so far I’d say they were quite innovative and challenging, especially for the CinCs as they must allocate cards to their subordinates who have to take what they are given. We’re still working on the best way to handle proper-sized multi-player games (the rules are aimed at one-on-one games really but there is limited provision for my-sized battles, ie big). So, in time honoured fashion here are some photos and a brief commentary on the game. 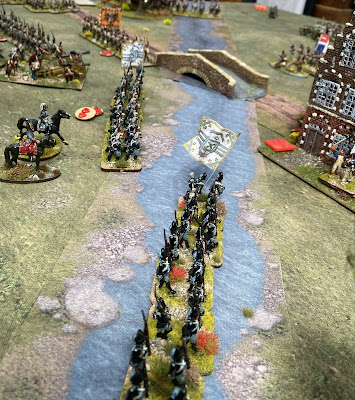 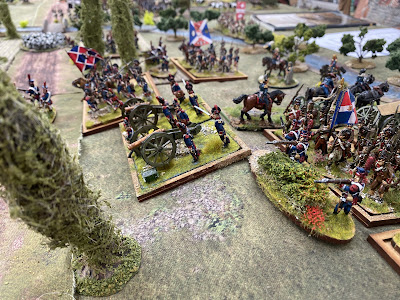 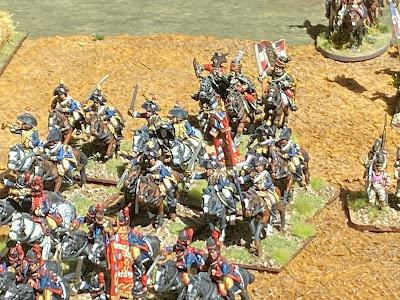 We called it a day when the Austrians were clearly romping ahead in terms of VPs. Although a victory for the Kaiserlichs the French were still in a strong position all along the line except for their left flank where the superior numbers and better quality Austrian cavalry were likely to roll up in time. But who knows….? The Emigrés did a good job on the left but the brigade was shattered after failing to take the town; the grenadiers had been stopped by the presence of cavalry on their flank but were still inching forward. My 'demonstration' in the centre had been slow and pretty pointless although the enemy had rushed their reserves into the centre, and my Bavarian brigade was still stuck in the river.

As we'd run out of time and although there was no clear tactical advantage the Austrians were deemed the victors due to their far greater number of VPs. They were also likely to roll up the French left with five regiments of cavalry!

Another great game and a good run out for the rules. It was easy enough to fit the armies into the troop types and qualities dictated by the rules and we shall have another game this coming Saturday.