Army of the Kingdom of Italy by Stephen Ede-Borrett reviewed. 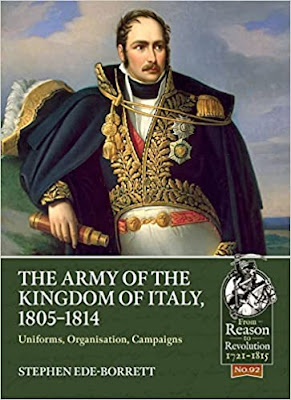 Napoleon ‘s Kingdom of Italy was an important cog in his war machine, both geographically, and as a provider of well trained and led troops to help satisfy his continued and growing need for manpower. On that basis alone this new book in Helion’s ‘from Reason to Revolution’ series by Stephen Ede-Barrett is a most welcome addition.

The author kicks off with a necessarily concise but useful introduction covering the Kingdom of Italy from 1805 to 1814, followed by a much more detailed section on Italy in the Napoleonic Period 1796-1814. This chapter really imparts the chaotic and fragmented nature of the Italian Peninsular and its constituent and often warring states and is an excellent introduction to the period for those not fully up to speed on Napoleonic Italy or in need of a brief refresher. The Kingdom of Italy supplied Napoleon’s army with a large number of men, and these were deployed across the Empire in their own discrete formations not only in Italy, but as far afield as the Iberian Peninsular, the Balkans, Germany, Poland and the wilds of Russia where a strong corps fought tenaciously but in the process was annihilated with around 98 percent losses.

This is the first wholly English language book on the uniforms, organisation, personnel and campaigns of the army of the Kingdom of Italy (and not the Army of Italy which was an entirely different organisation; the difference is explained in the book for the benefit of the uninitiated).

The main body of the book is dedicated to the different arms and services of the army, so we have comprehensive chapters on general officers, the Royal Guard, cavalry of the line, infantry of the line, artillery and support units and lastly naval units. The book contains many contemporary black and white illustrations and sixteen pages of gorgeous colour plates depicting the various different troops found within the army. Everything is rounded off with a number of useful appendices and without doubt this book will be of great interest and value to students of the Napoleonic Wars and in particular the army of the Kingdom of Italy. Another great title from Helion, an an enjoyable read and one more publication deserving a place on my bookshelves.
Incidentally way back in the day (the 1980s iirc) I had  the entire Army of the Kingdon of Italy for the 1812 campaign in 15mm, ALL of it. I wonder where it is now?
By Colin Ashton - July 13, 2022