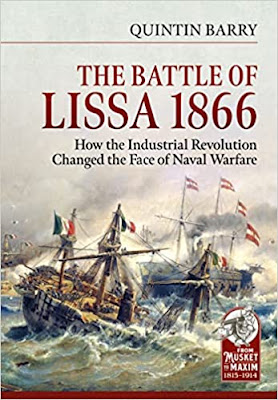 Prolific author Quentin Barry’s latest is this fascinating and comprehensive study of the campaign leading up to the naval battle of Lissa in 1866. I’ve read most if not all of the author’s other work which focus on mid nineteenth century land campaigns such as the War of 1866, the Franco-German War and the Russo-Turkish War of 1877 so the nautical focus of this book is a welcome departure. The fleets of the Kingdom of Italy and Austria met in the first major engagement of a new age, between significant fleets of ironclads and steam powered wooden warships armed with powerful new rifled shell firing guns. The result was a resounding victory for the Austrians under Admiral Wilhelm von Tegetthoff.

The book explores the development of steam powered screw driven warships, and the Introduction of armour. The fact that the author traces the development of ironclad warships in some detail in the years and wars leading up to this conflict rather than just providing a narrative around the campaign and battle of Lissa certainly adds value, as the battle is firmly placed within the context of the technologically innovative yet sometimes stumbling advances in warship design and development.

Chapters on the Austrian and Italian navies including tactics, weaponry and the strengths and weaknesses of their respective fleets lead nicely into a comprehensive and clearly written account of the battle. The stark differences in the opposing fleets’ tactics stand out as a contributory factor in the Italian defeat, although the Austrian use of the ram did set a rabbit running (in the wrong direction) among naval powers for a while regarding future tactics.

The book contains several very useful colour strategic maps to support the narrative together with others detailing the manoeuvres of the fleets in the battle. There are also a number of contemporary black and white photographs of some of the key personalities and several of the warships engaged.

Overall then, if this era and type of warfare interests you then I can recommend this book as a worthy addition to anyone’s library.