The Rise of the Sikh Soldier - Review 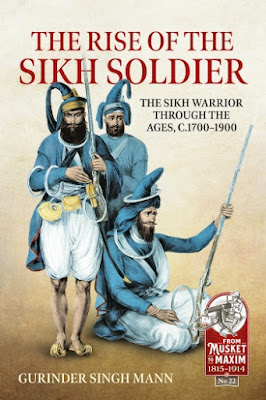 The Rise of the Sikh Soldier - the Sikh Warrior through the Ages, c.1700-1900 is the second book by eminent researcher and author of Sikh history and heritage Gurinder Singh Mann published by Helion in their ‘From Musket to Maxim 1815-1914’ series.
This new book considers the significant military developments that led ultimately to the formation of the Khalsa (or fraternity of the pure) and the rise to pre-eminence of European-drilled infantry over feudal cavalry under the great Maharajah Ranjit Singh. The author takes us through the incredibly complex institution that was the Sikh State, including ‘first contact’ with the British Honourable East India Company and the formation, and fall, of the Sikh Empire of the nineteenth century.

The impact of the many European officers employed by the Sikhs to train and command the army was massive, and the western training and discipline together with the Sikh soldiers’ tremendous personal courage and ferocity was to be encountered by the British in the first and second Anglo-Sikh Wars. The events of these two landmark conflicts are discussed in great detail, as are the earlier campaigns against the Afghans and Mahrattas. In fact it is the pre-Anglo-Sikh wars material that I found the most interesting, as much of it was to a large degree previously unknown to me. Indeed, the level of research involved in writing this book means that there is much new information, drawn from original sources. Following the Anglo-Sikh wars the Sikhs became a significant part of (briefly) the East India Company’s army and then Queen Victoria’s Indian Army, and some of these campaigns are also discussed.

There are seven excellent appendices, including the treaty of friendship between the East India Company and the Sirdars Ranjit Singh and Fateh Singh, and several important contemporary letters and other communications. The letter by Baron Hugel describing the Khalsa is particularly interesting as I’ve seen extracts before but not the whole thing.

The book would not be a Helion book if it was not jammed full of pictures of people and places, and we are treated to some fantastic contemporary black and white and colour illustrations or photographs, many of which I’ve not come across before, and plenty of decent maps of the region and of the main battles during the Anglo-Sikh Wars.

This is a formidable, scholarly and information packed publication. It might just spur me on to finish what’s left to do of my Sikh Wars collection. There are mainly Sikh irregulars, Hillmen, a battalion of Gurkhas and some regular cavalry left to do plus some more European cavalry but I don’t know when they will appear on the painting desk. Well, it’s not like I don’t already have enough finished figures already is it?