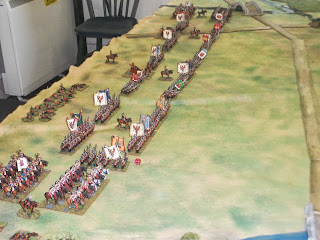 Above and below the armies deployed ready for battle 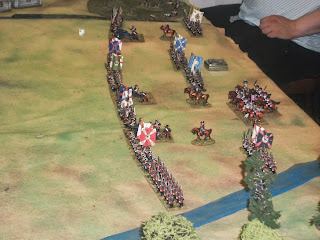 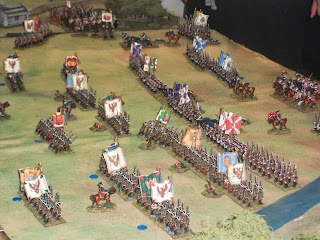 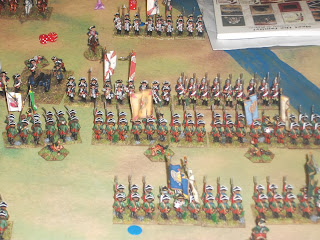 Russian right flank squashed against the river in a musketry duel with the Prussians. 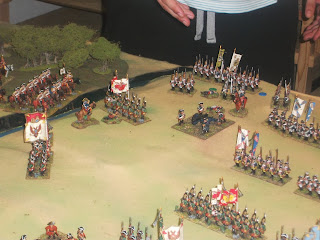 Above is the nearest thing the Russians got to breaking the Prussian line. After pushing back their opponents they were unable to exploit the opportunity due to some appaling dice throwing! 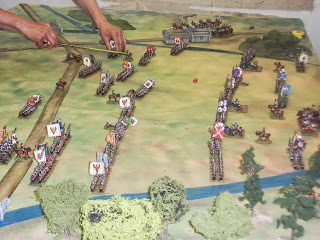 Last night's game at Durham was the Russian/Prussian clash from the SYW campaign. We (the Russians) were pretty much doomed from the start as the 'random' terrain generator created a funnel-shaped battlefield with the Prussians holding the narrow end with their flanks secured by river, hills and woodland. We outnumbered the Prussians 15 to 10 in infantry and 4 to 1 in horse but unusually the Russians had fewer guns. Nigel gamely ordered us to advance, which we did as quickly as possible. The Prussian front was too narrow to try and focus on one end or the other. Paul took his cavalry across the river on the Prussian right but needed to do something nasty to the Prussians on the flank if his mounted troops were ever to get back over the river. Sadly, the club's wargames premises do not boast air con or even working windows so, with the heat wave we are experiencing at the moment, the room became uncomfortably hot and smelly (although it is often quite smelly anyway...urgh). The Russian attack was suffering heavy casualties especially from the Prussian artillery, and despite some local successes on Paul's flank and because of some desperately bad Russian dice throwing, it was not looking good. By 9:00pm it was all over as there was no way the Russians were going to do any more damage to the rather static Prussian line and we were melting. The photos shows the early and middle stages of the game (slightly out of order I think), and hopefully show off Nigel's beautifully painted troops. Photos of the end of the game appear to have been purged..........

Verdict: we manned up and played the game but the rules (der Kreigskunst) really don't do it for me or, for I suspect, an increasing number of other members. I know you can't blame the rules completely, but they make artillery far too powerful, favour a static defense, give Prussians superhuman powers, are very inflexible and clunky and IMHO a bit anal in terms of some silly and very non-18th C rules. But these were the rules of choice for the campaign and we have won some and lost some so it can't be all bad. The heat didn't help either and give it 3-4 months and we'll be complaining about the snow! However, and as a complete aside, one of the other rooms at the community centre is used by a pole-dancing class. You have to walk past it (several times in fact if you keep 'forgetting' stuff in the car) to get to our room and they always have the door open, so yesterday evening was especially hot in more ways than one!
By Colin Ashton - July 19, 2013