Krackow Militia painted and based 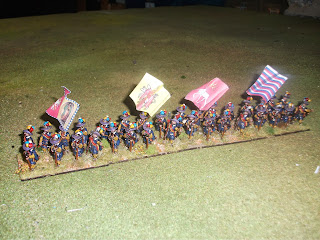 One advantage of working from home is, when I am home, I can do my work at whatever time of day I like as long as it is (a) done, and (b) I am available during 'ormal' office hours. This results in many an opportunity to spend 30 minutes here and there on various painting projects spread over the course of my waking hours. I tend to have quite a few things on the painting desk at any one time, which means that every now and again I get several units/items finished almost all at the same time. Basing marathons apart, that works for me as, for example, I currently have some TYW dragoons, SYW Cossacks and various vignettes, FIW settlers by the score and some Carlist War British Auxilliary Legion and French Foreign Legion. The Army Painter quickshade is also a Godsend for my approach to getting units painted and 'table ready.'

Pictured here and completed quite a few weeks ago are 32 TAG Krackow militia in natty western dress from their Polish renaissance range. All my infantry units for Pike and Shotte are in 8's which while it works for Swedes and Imperialists I am unsure as to whether it will with my Polish infantry. Putting together bigger units might be the answer and would reduce their effectiveness significantly when shooting. The flags are off the net but I know they are not anywhere near 100% accurate, but they are Polish and I think they look rather good en masse. 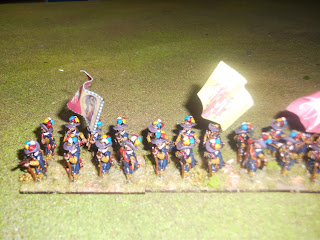 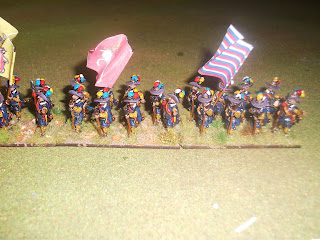