Two wargames in one day! part 1 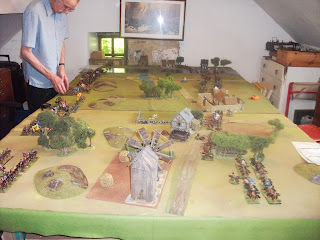 Well, I had a really enjoyable and very tiring day yesterday. In the afternoon John came up and we played a smallish TYW Swedes v the Imperialists game We used Pike and Shotte, rules I have not played for some time although I am a big fan. This was also the first table-top outing for my 28mm TYW armies.

We rolled for sides and and I got the Swedes. The scenario required the Swedes to hold the bridge and supply depot at the farmhouse until the agreed time to end the game. They had a brigade of two veteran Swedish/German foot rgts, a  brigade of two rgts of Saxons and two brigades of Horse, one Saxon and the other Swedish/Finish. There were also some commanded shotte and a couple of guns. The imperial army contained three brigades of foot ( two rgts each), a 'brigade' of four sqdns of Croats, a brigade of Harquebusiers and one of cuirassiers, each of four squadrons. They also had two units of dragoons, some commanded shot and a gun. 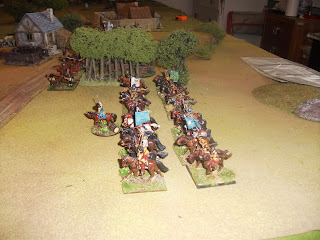 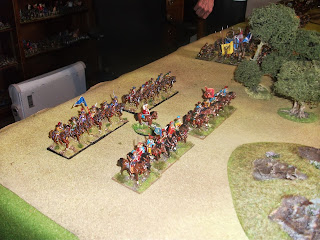 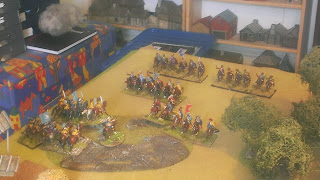 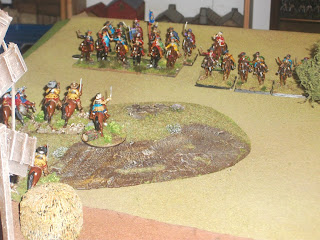 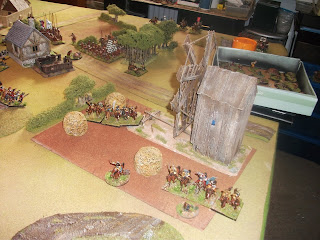 I'll describe the action by table top sector rather than chronologically as this'll be easier to follow. On the Swedish left, the Saxon horse advanced against the Croats in order to prevent them from influencing the game in any way. Throughout the game, the Saxons proved to be generally courageous in charging the Croats but it took them all afternoon to break two out of the four squadrons, but only at the final cost of becoming a spent force as the entire brigade was either shaken or broken. Their (my?) mistake was to use the follow through rule when invariably pushing the Croats back but then being beaten in the subsequent combat by newer, fresher opponents. Throwing really bad dice didn't help much either. 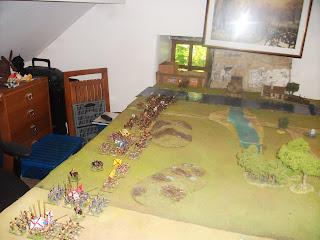 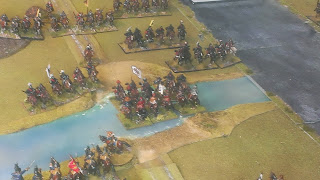 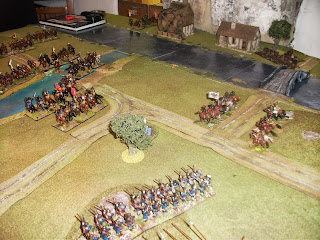 On the Swedish right, four squadrons of horse were facing eight of Imperialists, half of which were cuirassiers! The Imperialist advance was slowed by some poor command throws from John, including a 'blunder' when trying to activate his dragoons who promptly turned about and galloped off the table. He therefore became the first proud using of my blunder dung heap!  The stream flowing into the river across the Imperial front also delayed their advance.   My Finnish horse thundered into the first cuirassier unit as it was crossing the ford. Predictably they lost the combat, but as well as succeeding in forcing the cuirassiers into 75% of the available table space, did slow them and split the brigade up so it was not always possible for units to support each other. What followed was a furious series of charges and counter charges that while delaying the Imperialists, eventually wore out the Swedish horse until they were almost all broken or shaken. Another spent brigade. The cuirassiers didn't get it all their own way as one squadron was lost and the others had taken casualties but they were now in a position to threaten the Swedish centre. Worthy of note was the Swedish gun guarding the far side of the bridge which failed to hit anything until the very final turn when they succeeded in driving some Imperial dragoons off with canister, thus saving their end of the bridge.

In the centre, John's three brigades of foot advanced but made slow progress. The right hand brigade took forever to get into a position where they could deploy into line and trade shots with the Saxons. The centre brigade and the commanded shot did better but were soon held up by the other Saxon regiment and the commanded shot in the farmyard. Most of the troops in the centre became disordered and shaken due to the large number of 6's thrown by the Swedes and Saxons causing disorder among the Imperialists which effectively stopped their advance in its tracks. The left most Imperial brigade crossed the stream but was met by heavy fire from the Swedish 'Blue' brigade and halted. 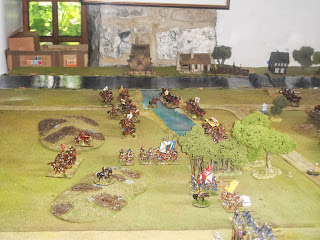 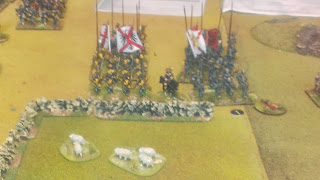 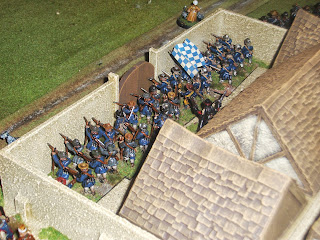 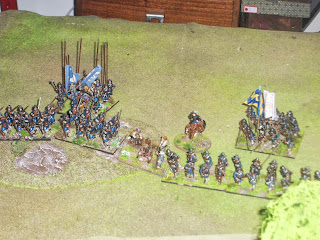 At the designated time I threw to see if any Swedish reinforcements would arrive. I was successful and when I threw my dice to see where they would appear threw a '4' which meant they would enter the table on the far side of the river by the bridge. With all that Imperialist horse milling about on the other side of the river that was where it would stay as well, but at least the bridge was held. John's only hope now was to try and roll up the flanks now that my horse had been driven off but sadly time was our enemy so we had to call it a day.  John managed to throw three blunders during the course of the game, so the dung heap got plenty of use during its first outing.

Verdict: Lots of action in a fast moving game. The rules worked well and we both had an enjoyable afternoon. I was also pleased with how the armies looked on their first outing. No units disgraced themselves either. My camera expired during the game so sorry about the lack of photos and the quality of some as I had to use my phone.
By Colin Ashton - July 26, 2013