Ambush! SYW scenario in the wilds of East Prussia x 2

Peter came down on New Years Day evening for another game. I think he is hooked! I'd barely cleared away the last game before Christmas but set up what I hoped would be a testing scenario for both sides. We played a Seven Years War game set in East Prussia, with a smaller Prussian force led by Peter catching the Russians on the flank in line of march. The Prussians piled into the flank of the Russian army but were driven back as they failed to concentrate their forces. A fierce cavalry battle in the centre almost tipped the balance in favour of the Russians as they broke through the Prussian infantry and drove off much of the Prussian cavalry. The Prussians recovered though and plugged the gap, sending the Russian cuirassiers reeling back. Overall losses were about even so with one brigade broken on each side and the Prussian cavalry struggling after taking a battering we called it a draw. No photos of that game sadly.

We fought the game again this week, changing sides so I took command of the Prussians and Peter the Russians.

The 'Crack' Prussians were offset by the four battalions of second line troops but their cavalry was as good as the Russian Cuirassiers as the latter were very poorly mounted. The Russian infantry were classed as 'stubborn', giving them a re-roll on one save per move. I shall now just let the pictures tell the story...... 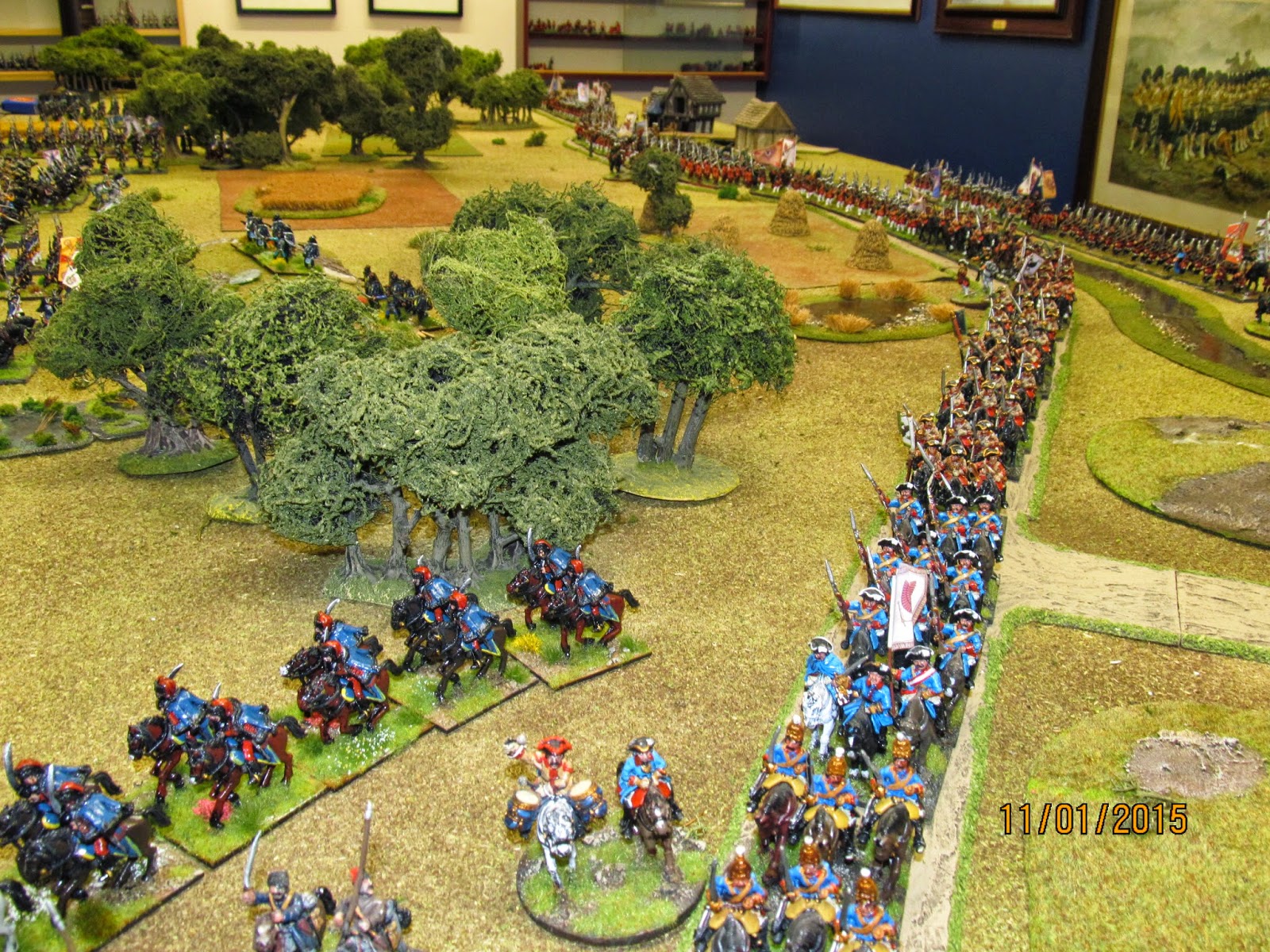 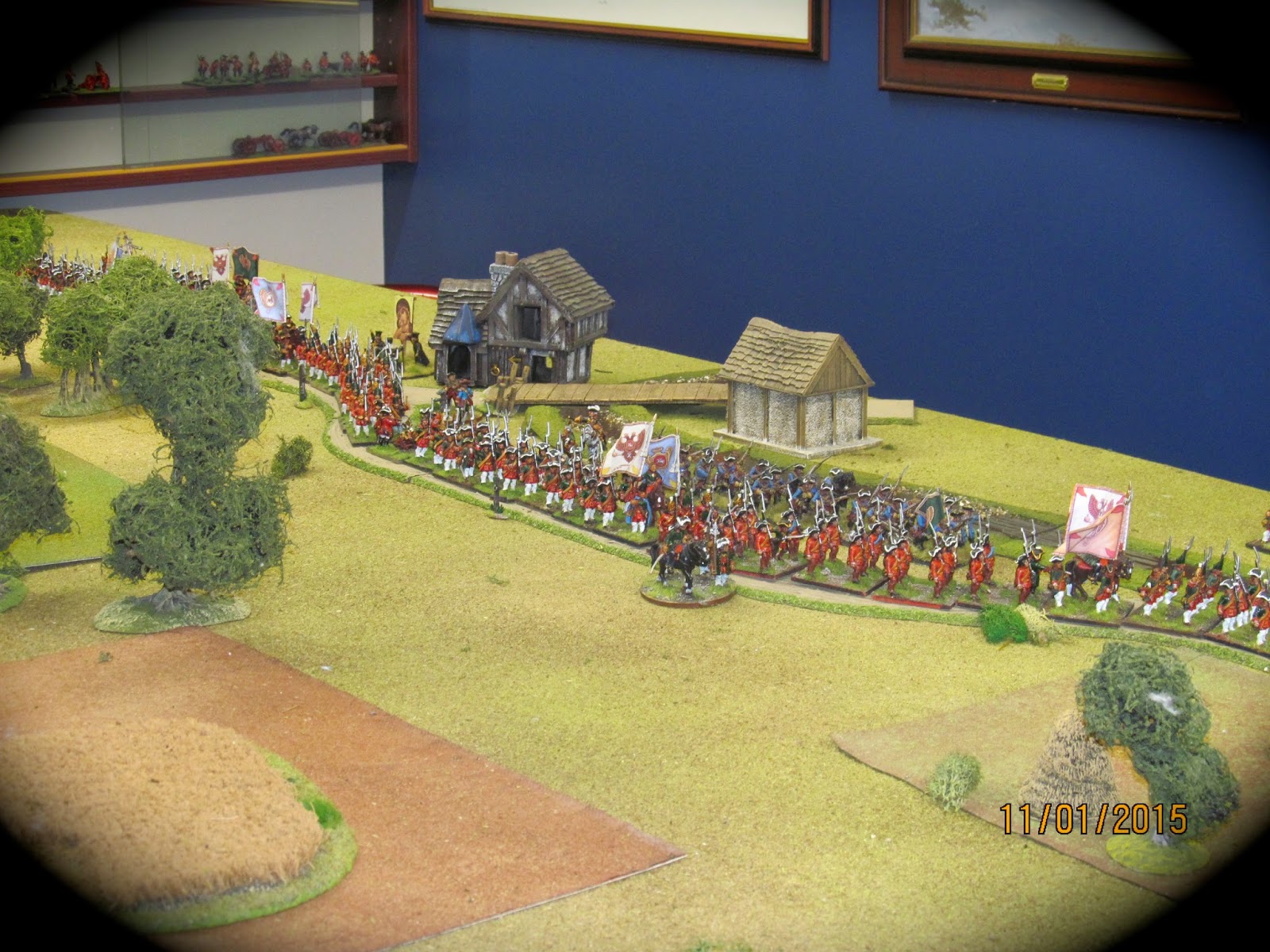 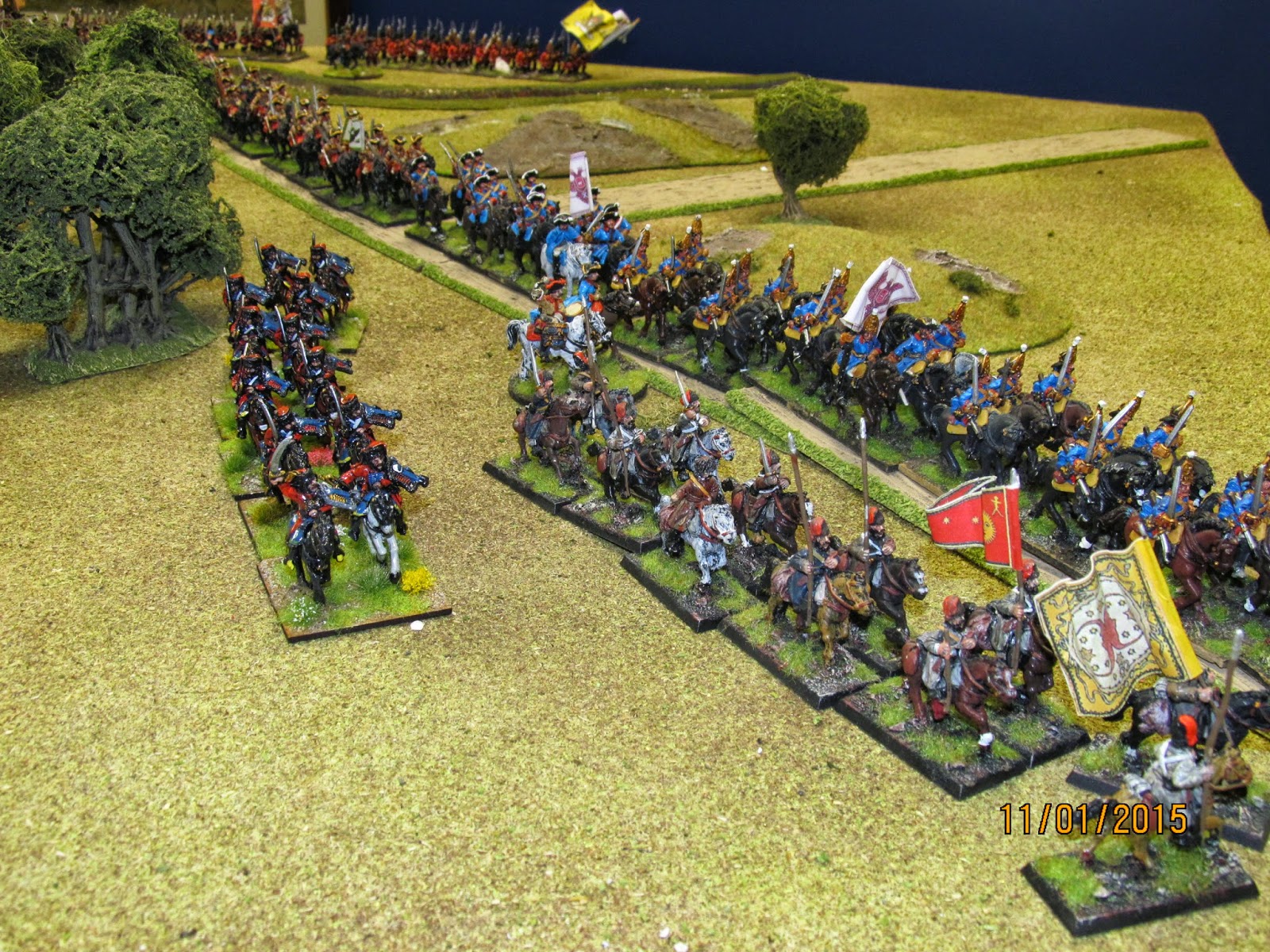 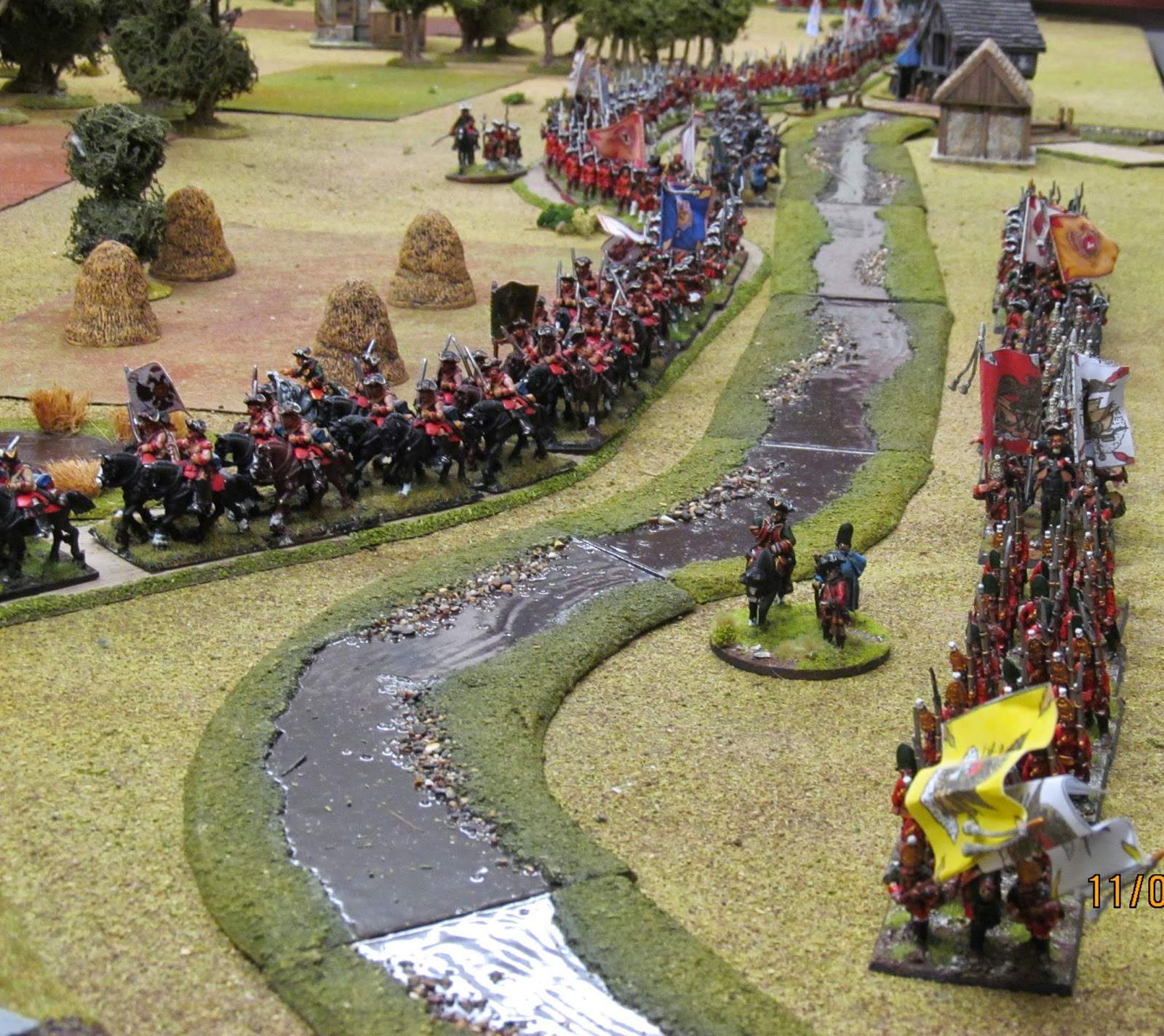 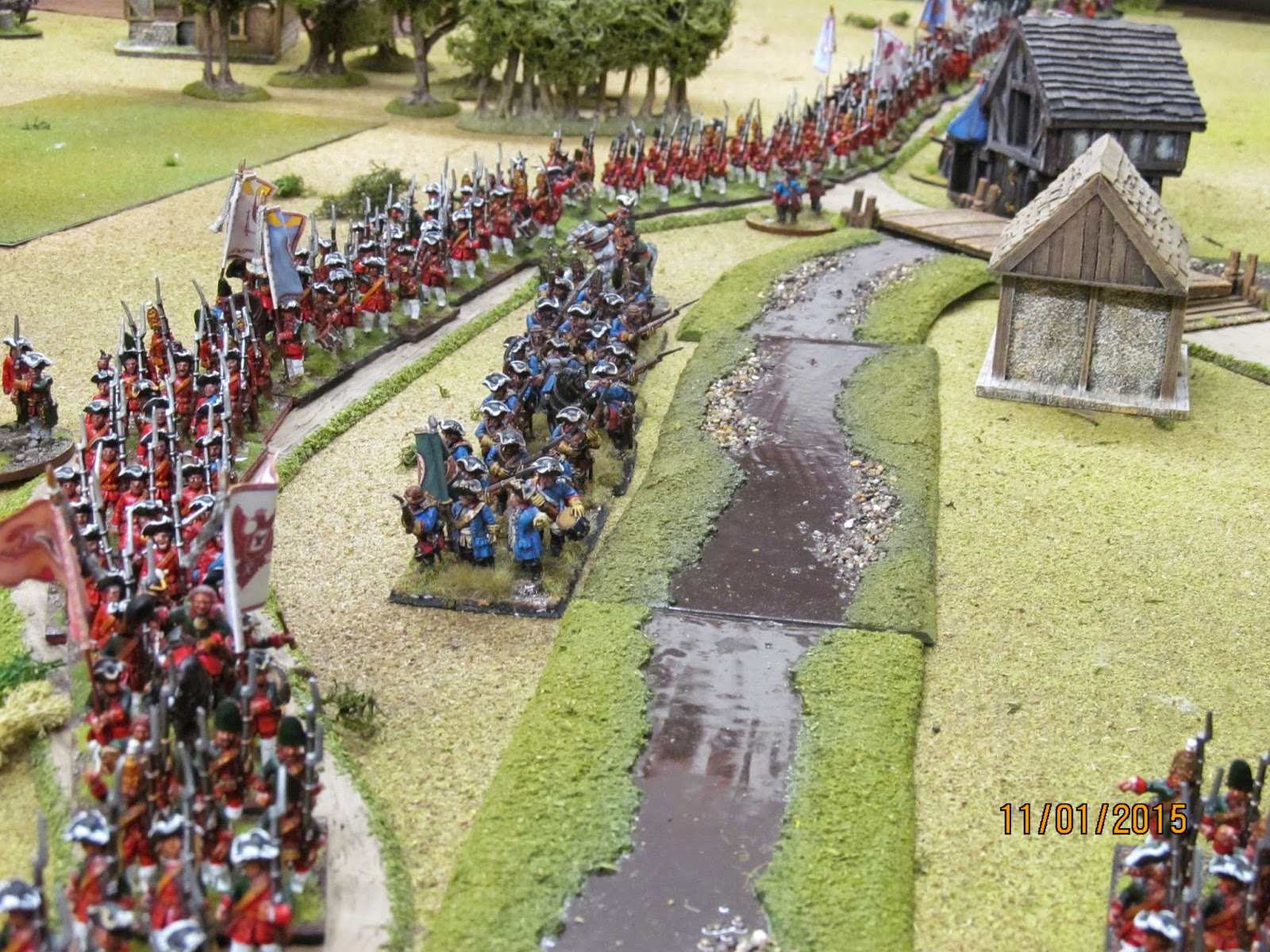 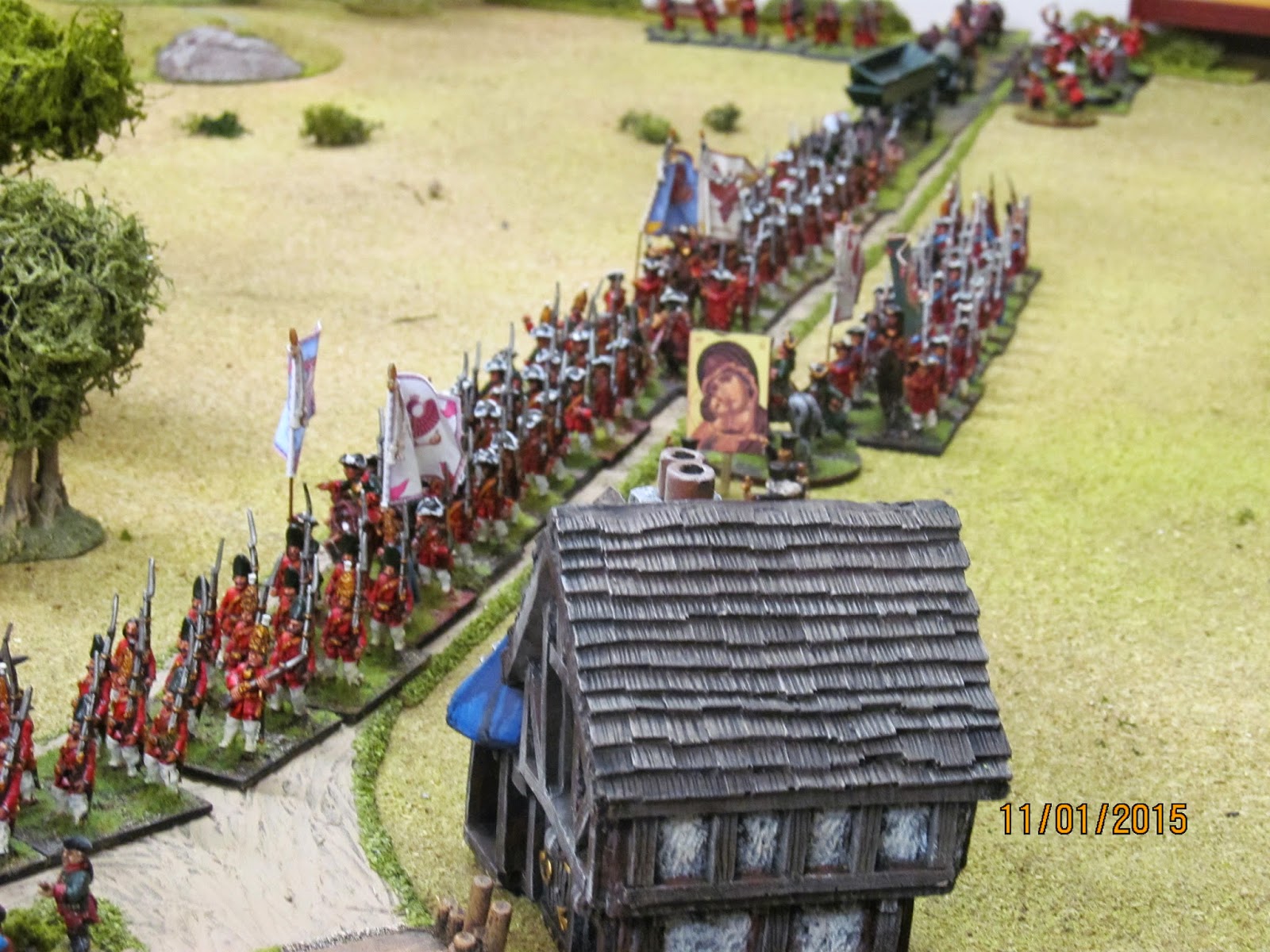 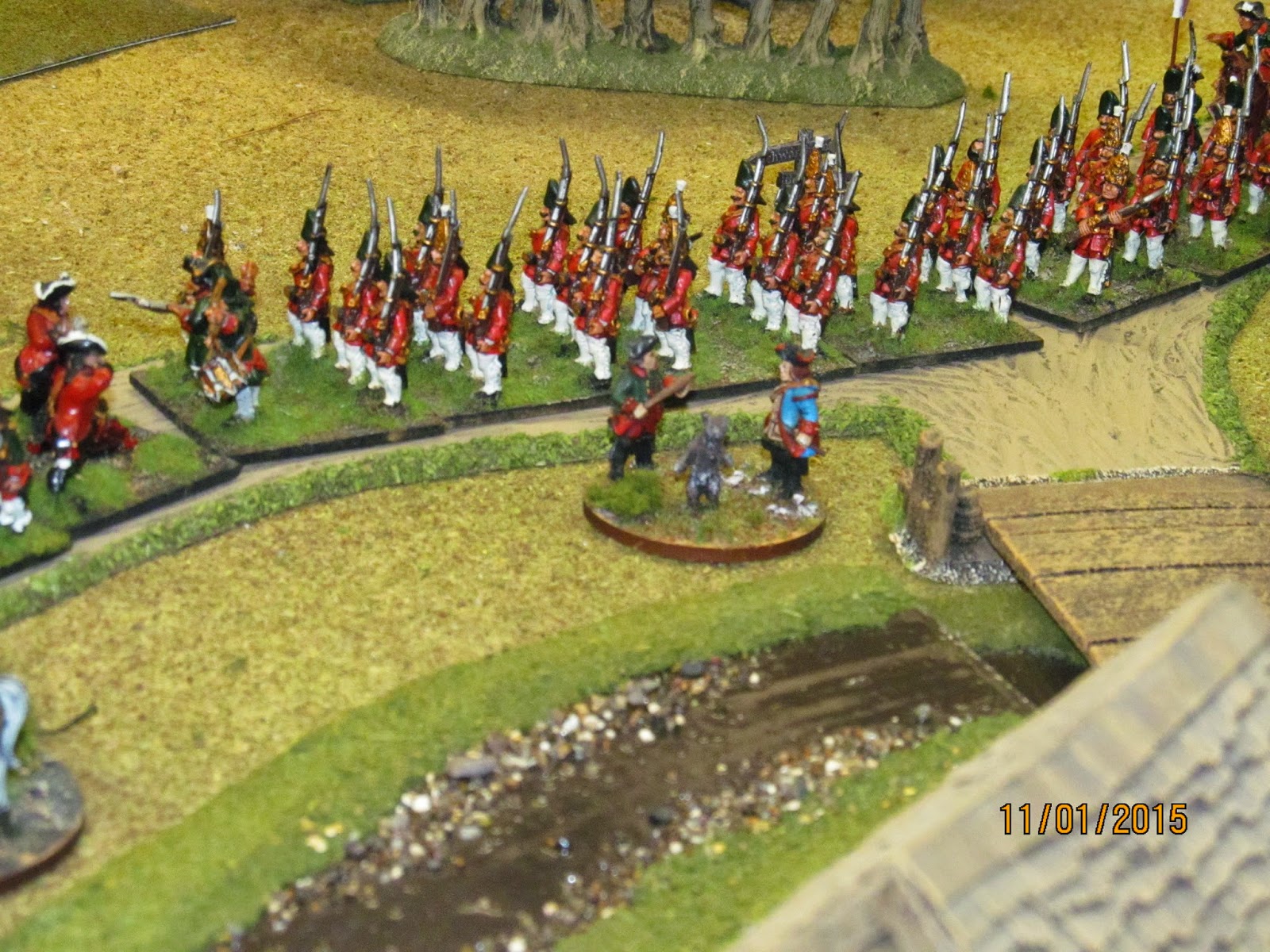 The top pictures show the Russian army strung out on the march along the whole length of the 12' table. 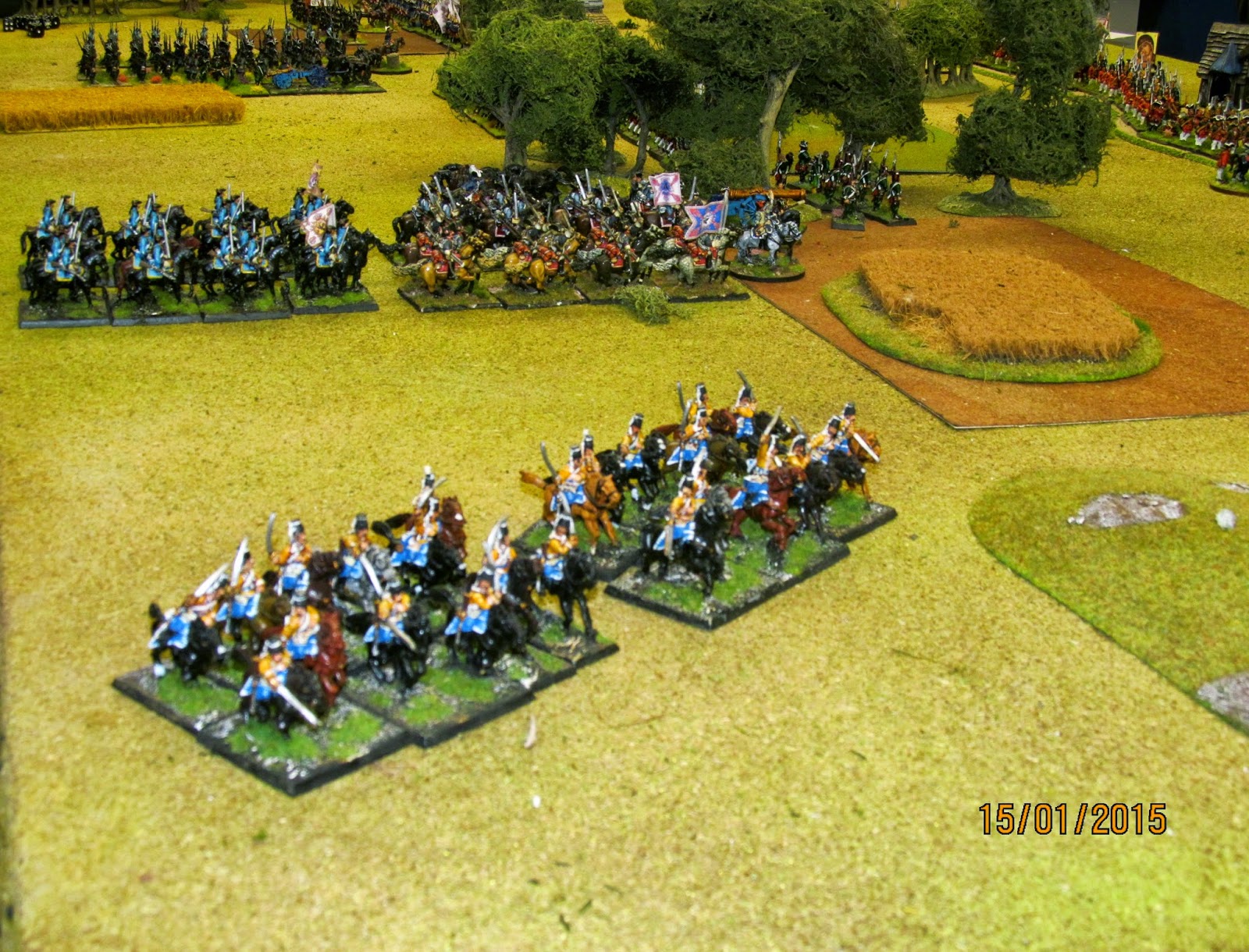 The Prussians emerge from the mist. Hussars cover the right flank while the Dragoons threw a blunder and only managed a single move onto the table. 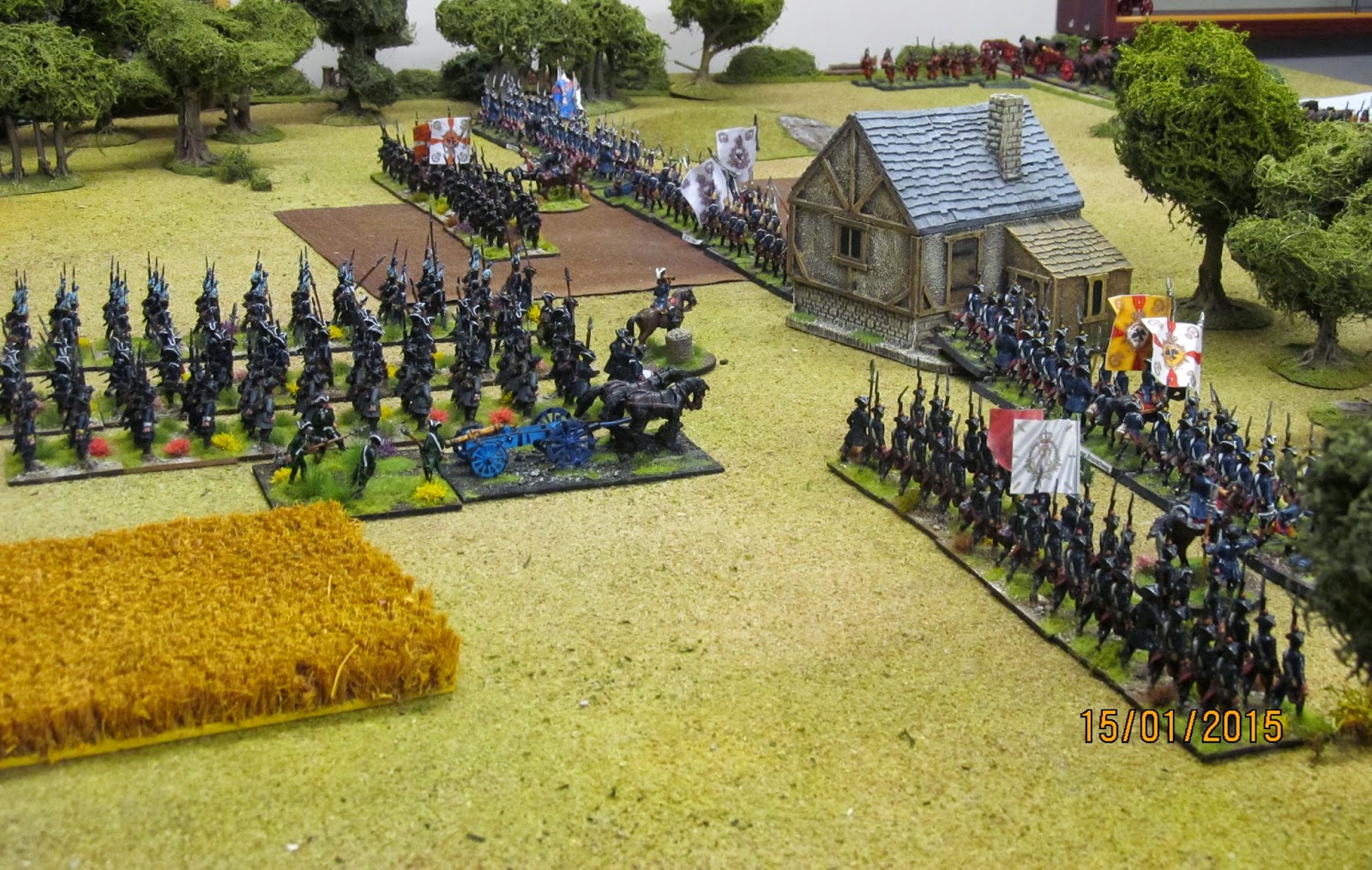 The Prussians quickly deployed their two lead brigades into line, supported by the Militia and Frei btns to their rear. Both lead brigades closed rapidly with the Russians. 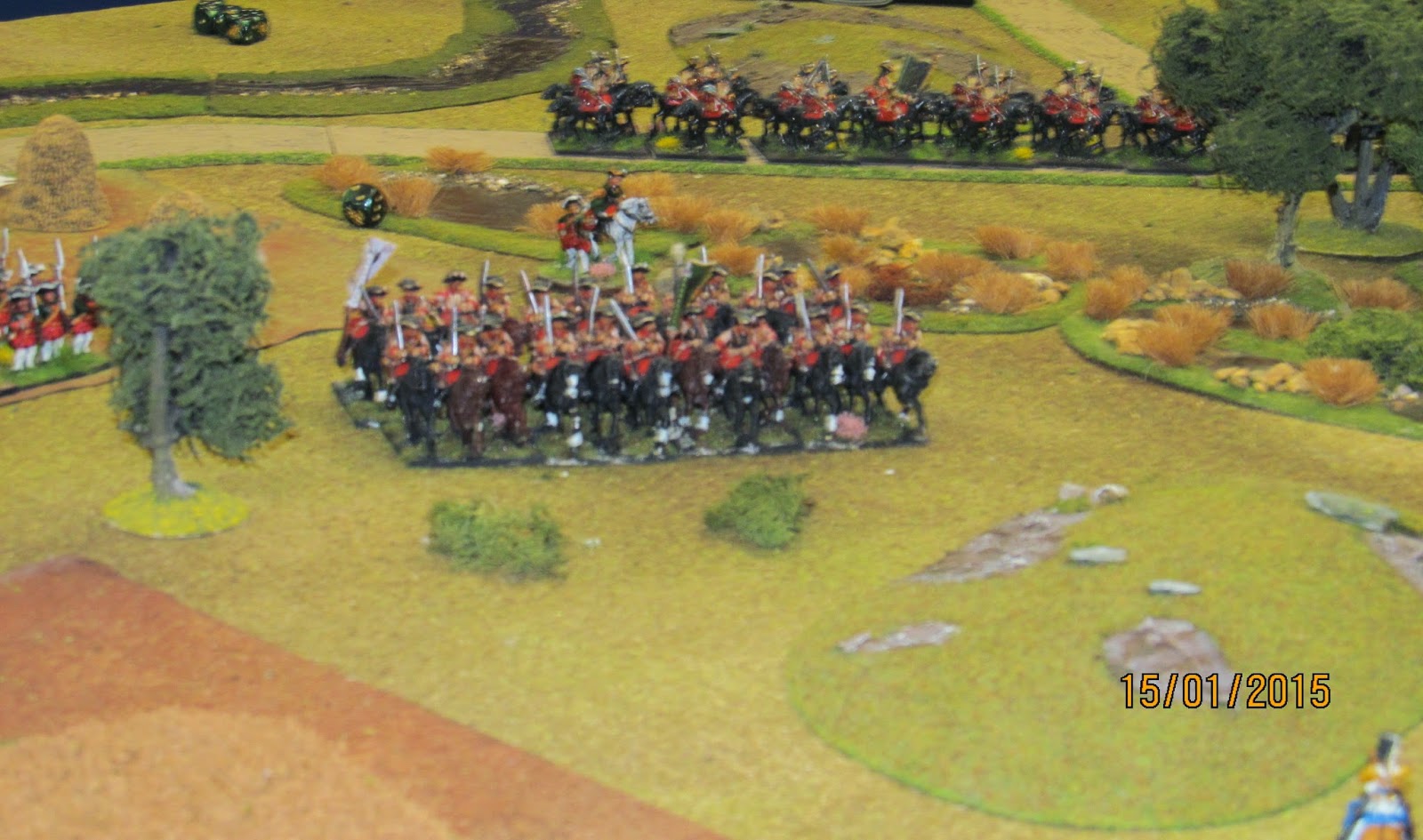 Russian Cuirassiers lumbering forward. Most of the Russian cavalry stood immobile on the road as they failed their command rolls! 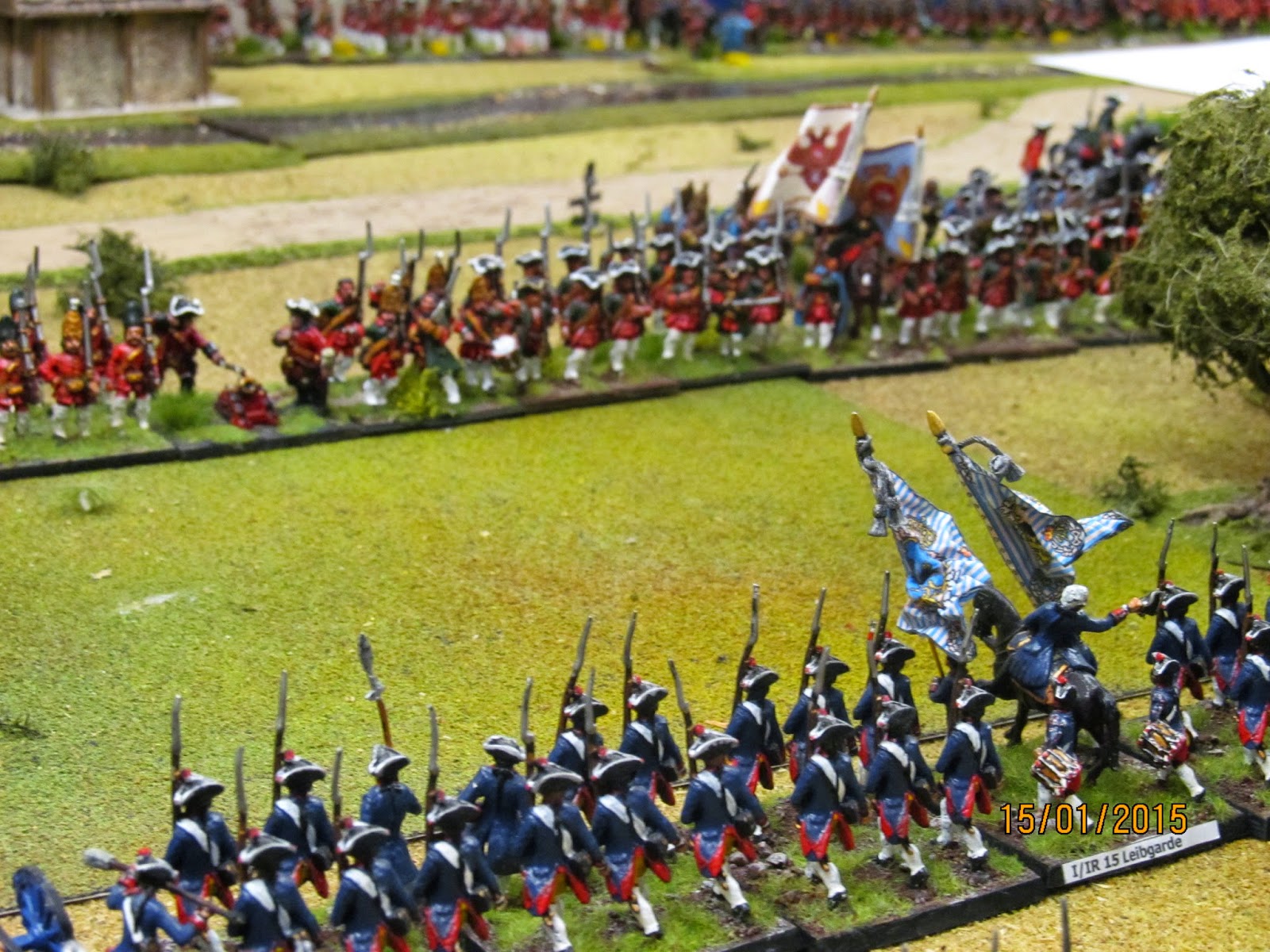 The Prussian Guard close with the Russian centre. The seemed immune to the enemy fire as they saved every hit until the penultimate move when they burst throughout the Russian line but becomes shaken in the process. Thankfully the Russians were in no state to exploit this as by then one of their infantry brigades had been shattered and the others were badly mauled. 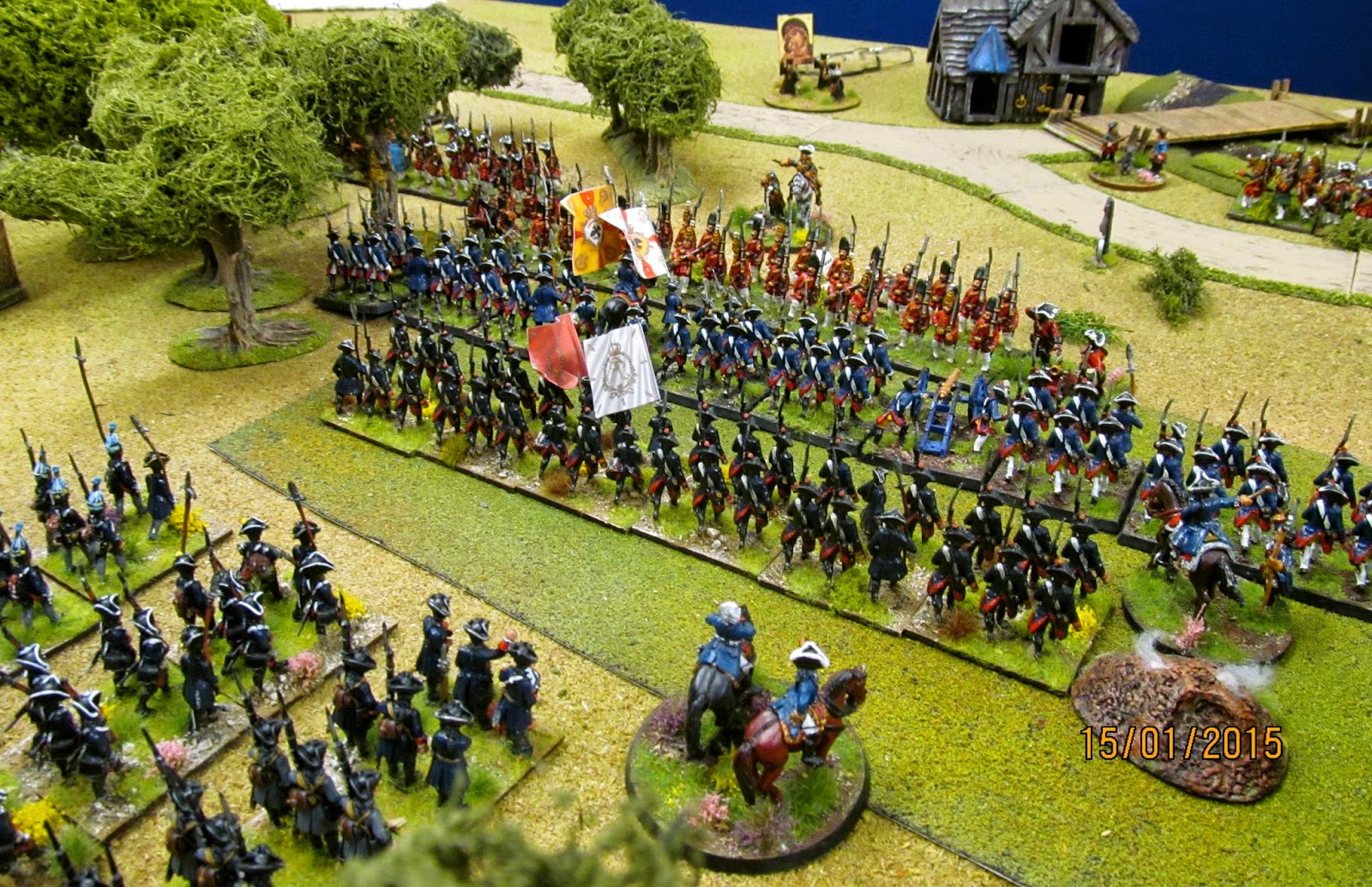 The Russian combined Grenadier battalion was a hard nut to crack. Although shaken they held on against tough Prussian opponents who were pouring fire into their ranks turn after turn. 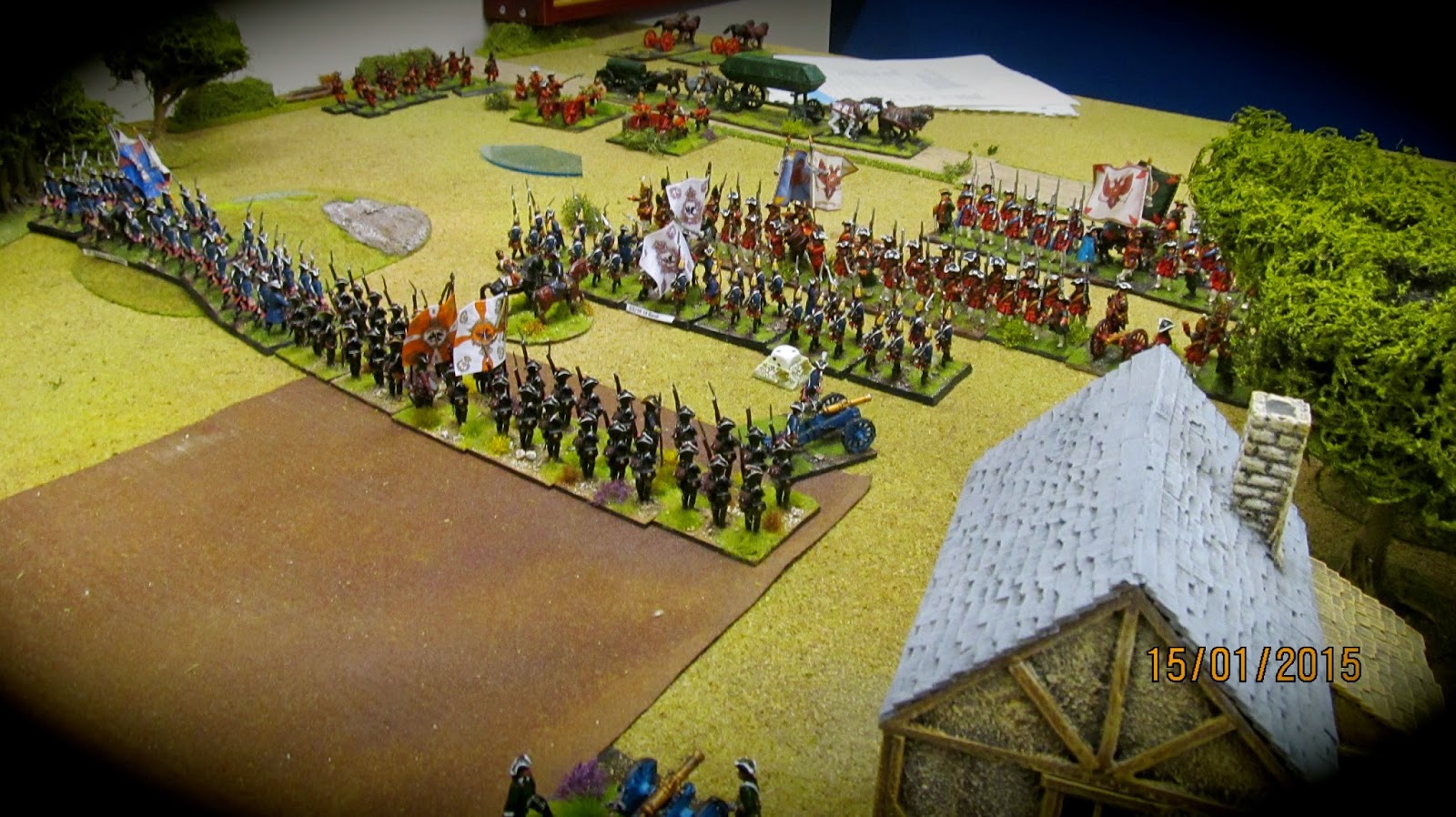 The Prussian left. Grenadiers close with the Russians. 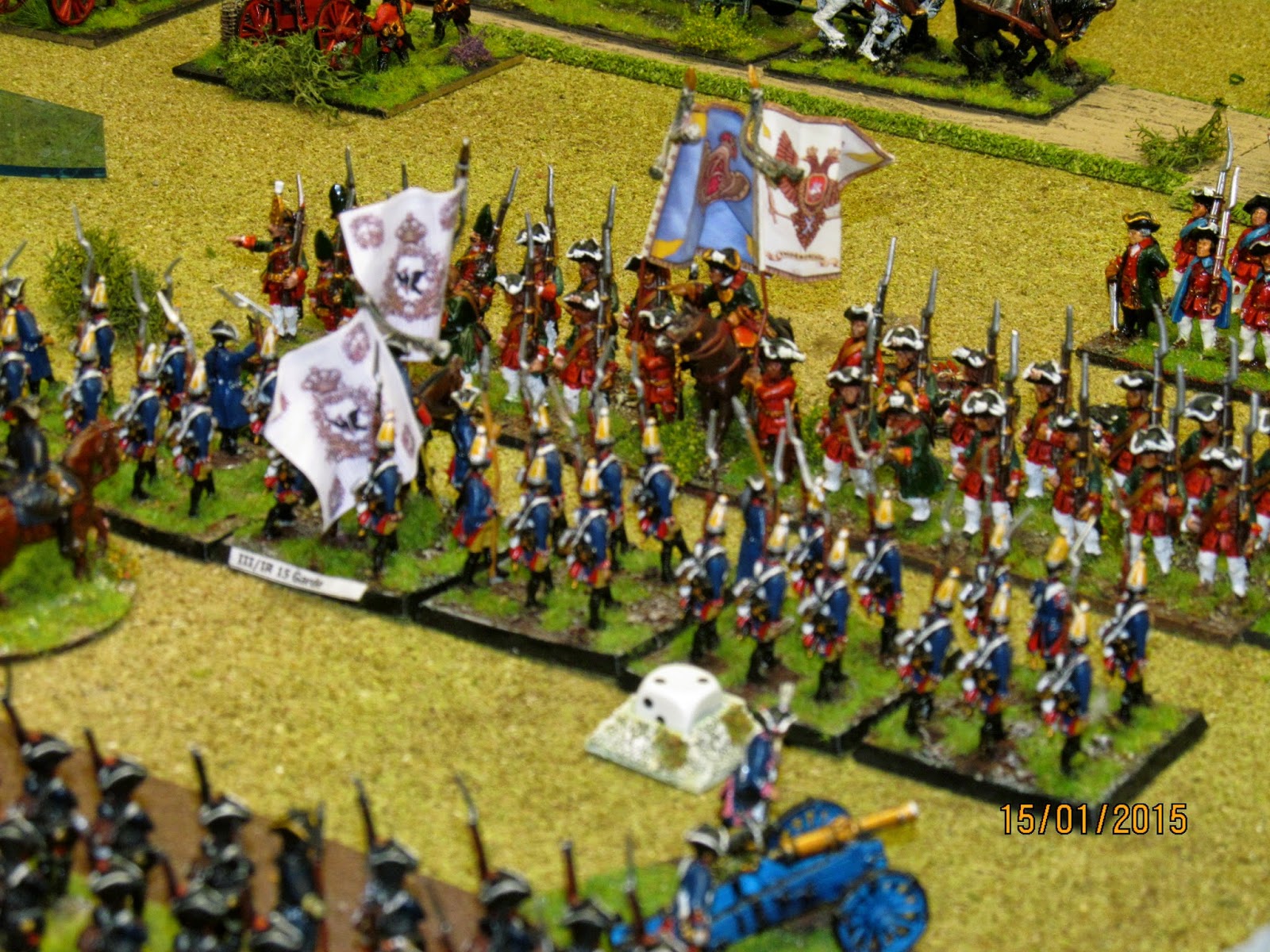 The Prussian grenadiers on the left were driven off shaken by stubborn Russian infantry supported by their artillery. They recovered to return to the battle later. 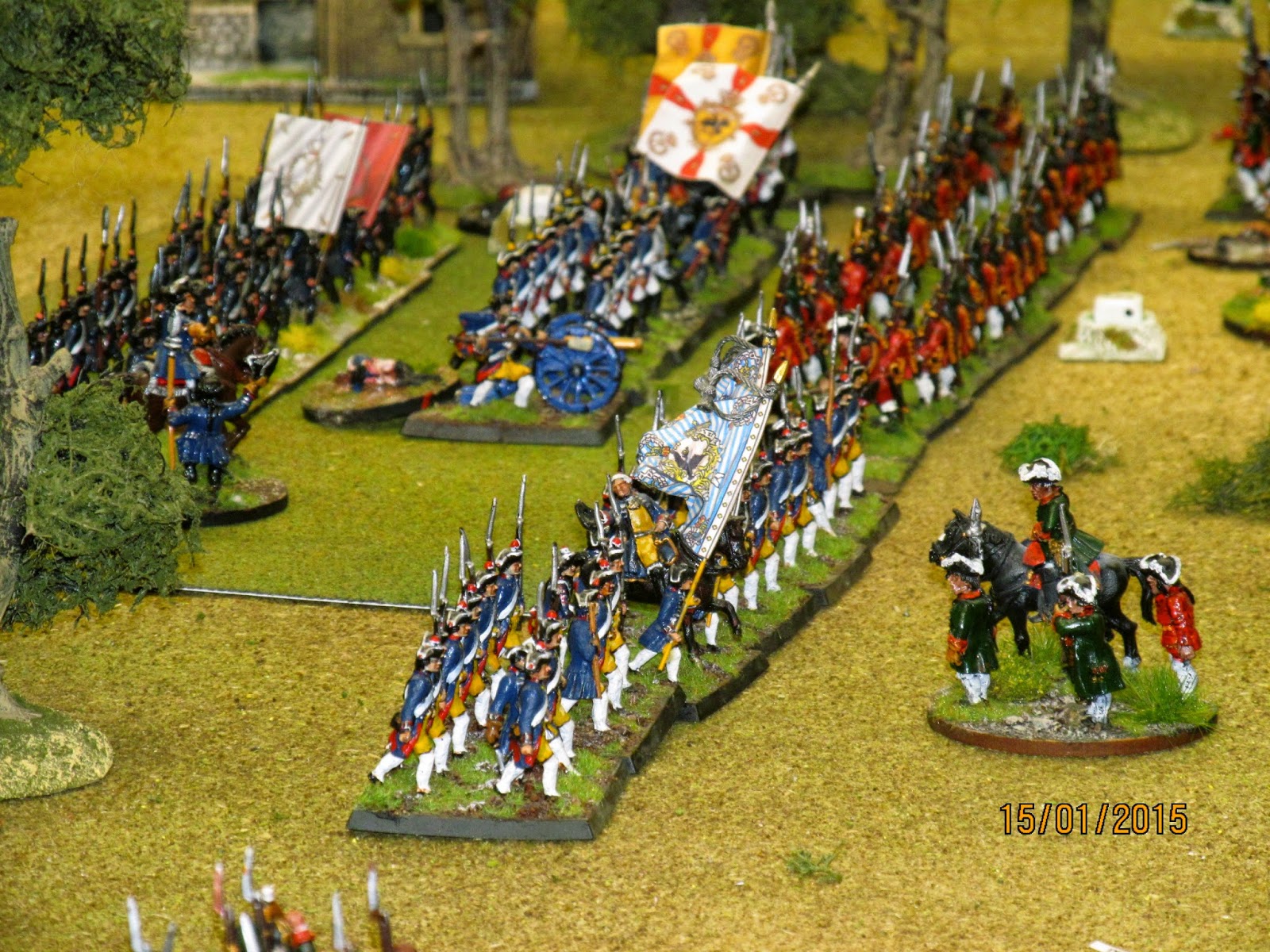 Back in the centre the Prussian Guard after breaking the Russian line. 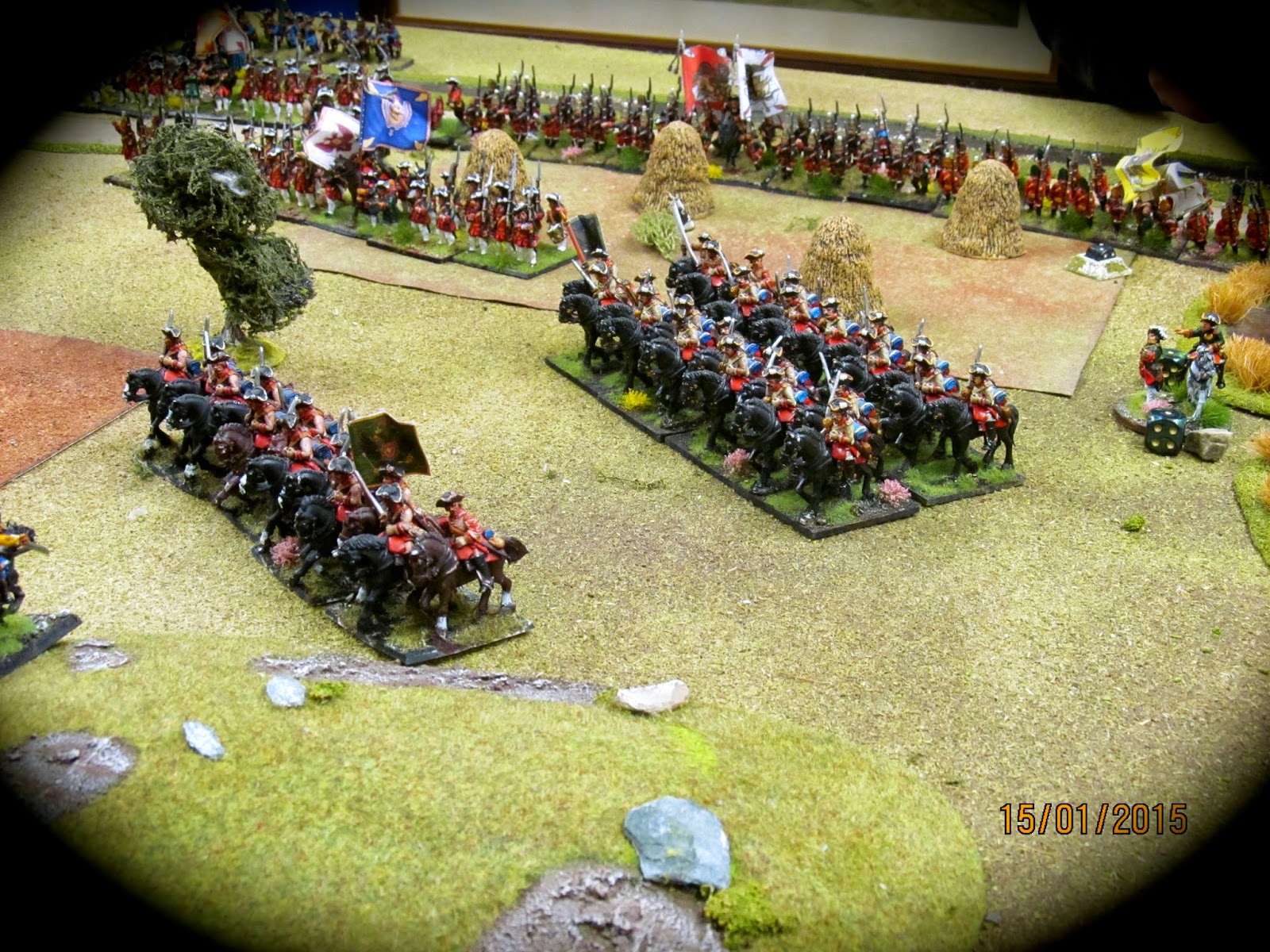 Russian Cuirassiers charging the Prussian Dragoons. They were initially successful but were driven back after becoming over extended. 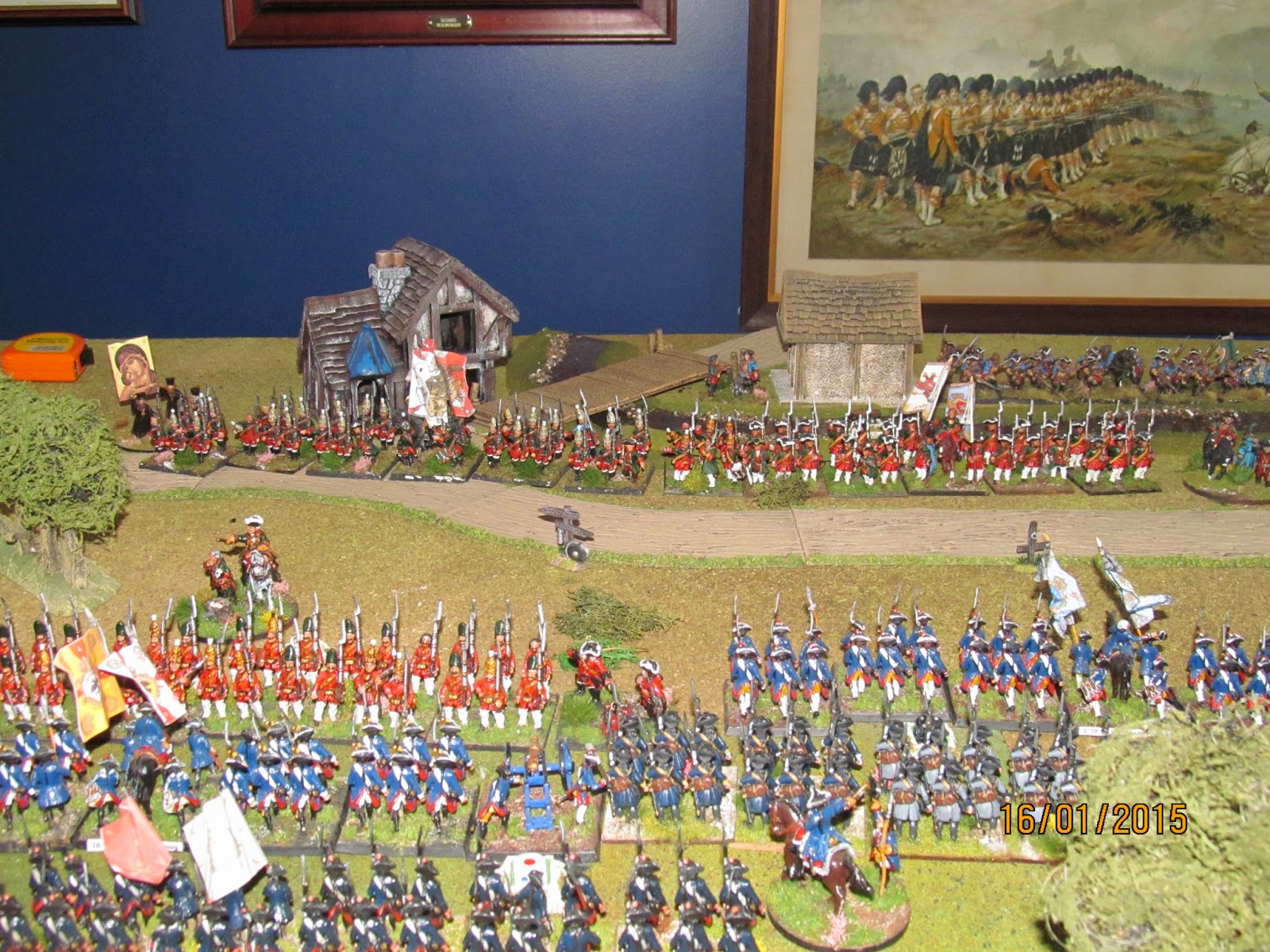 The centre of the battlefield from behind the Prussian lines. The Russian Cuirassiers preparing to charge again, supported by Horse Grenadiers and Dragoons. 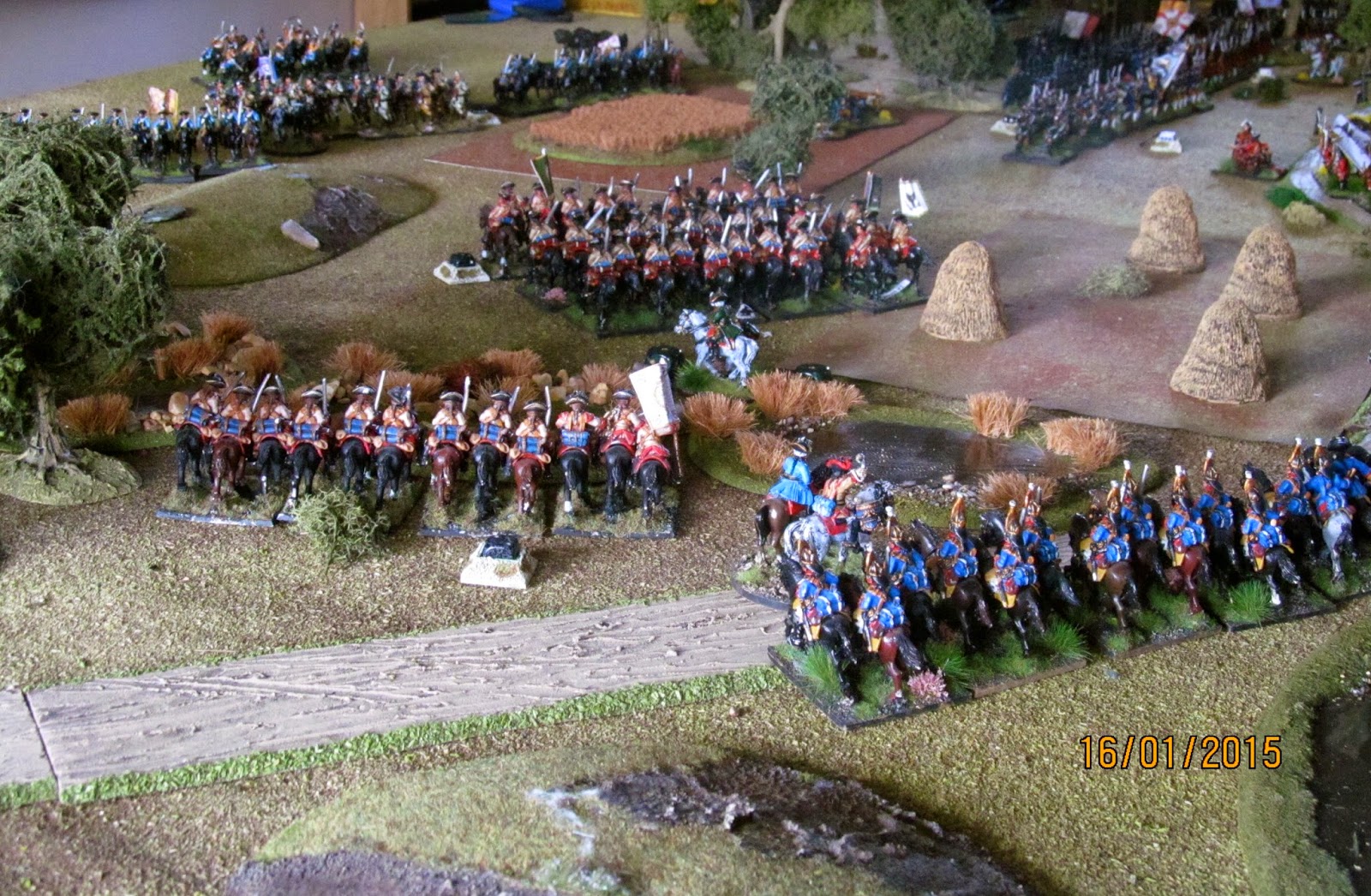 The same scene this time from the Russian perspective. 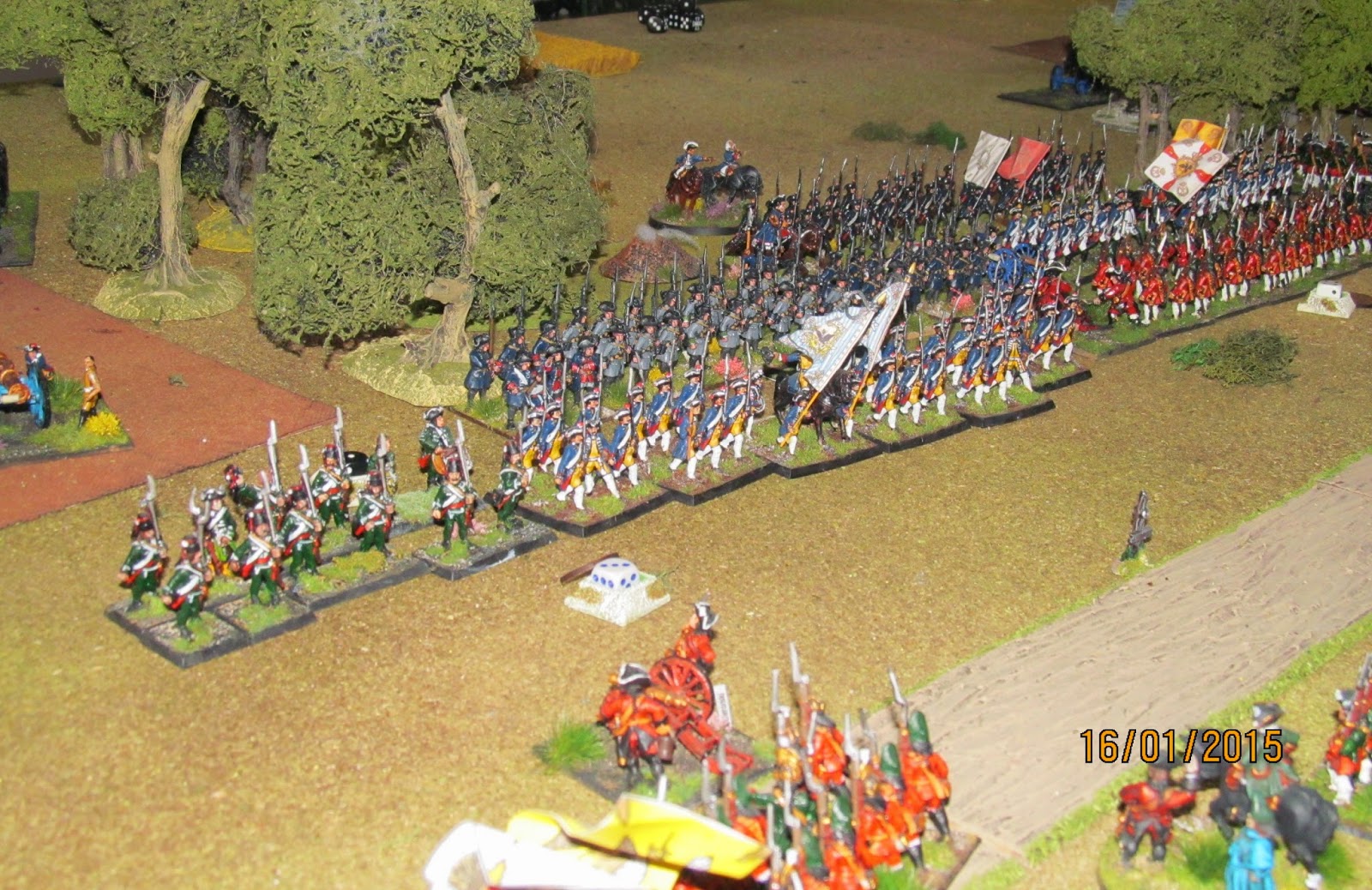 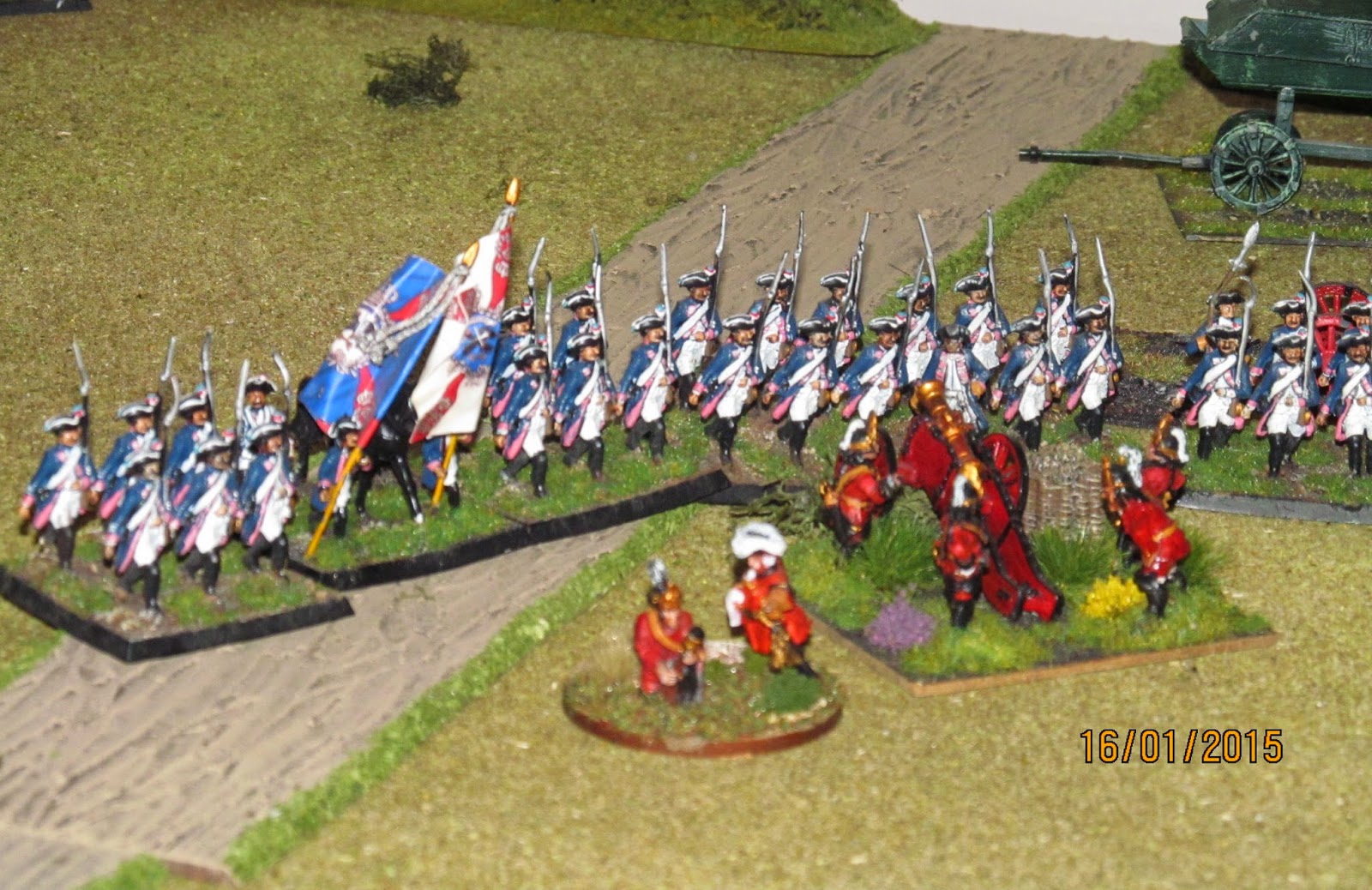 On the left the Prussians took a chance and charged the Russian artillery, luckily taking few casualties in the process. They managed to overrun the first gun easily but it took a little longer to take the second. 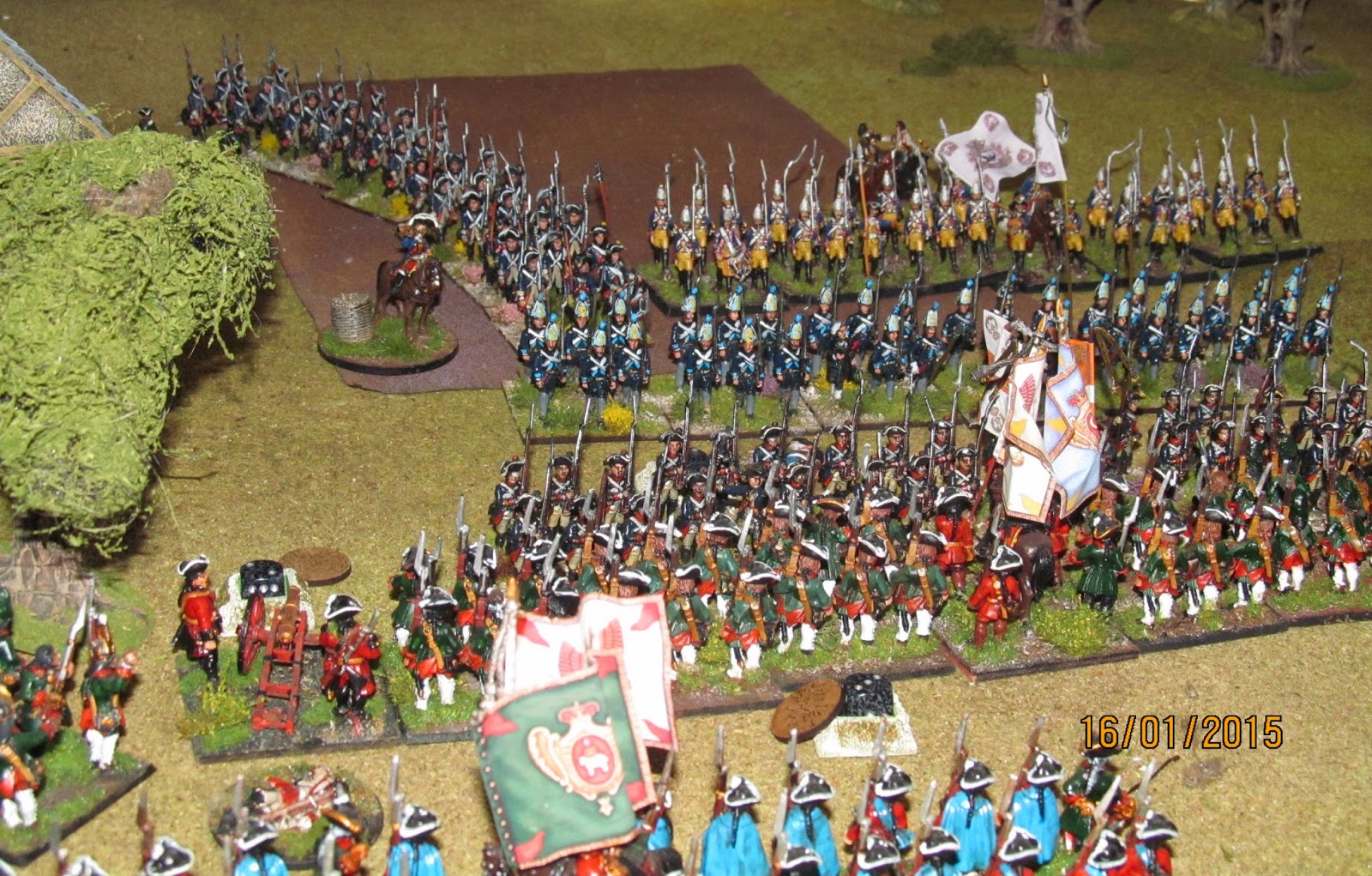 The Russian right flank showing the tide of Prussians advancing towards the crumbling Russian line.

At the end of the evening the Prussian army was pretty much intact. Apart from a unit of Dragoons that had been broken and several shaken there were no shaken brigades, although the cavalry had taken a battering holding off the Russians. Concentrating their assault ensured that the Prussians had local superiority in quantity and in part, quality. The Russians were never able to get their numerically superior cavalry into a potentially winning position. The central infantry brigade was shaken and withdrawing, and the brigade on their right was very close to crumbling. Their heavy artillery had also been overrun. We agreed it was a clear Prussian victory although there was an untouched brigade of Russian infantry facing the Prussian centre and the Russian cavalry had finally started to obey orders! A great and rather tiring and stressful game, but for all the right reasons!
By Colin Ashton - January 16, 2015