Richard III and the Battle of Bosworth 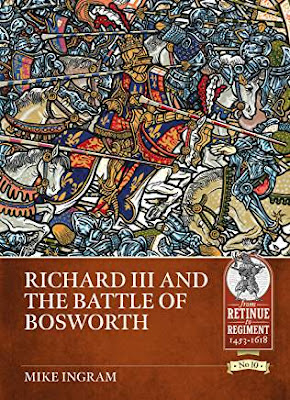 Prolific publishers Helion &Co have introduced another series of books under the “From Retinue to Regiment” banner. The first in the series is this book by Mike Ingham which I have to say is pretty good. I might st admit from the start to being a Lancastrian by birth and am not a fan of Richard. To be honest I also fell out of love with the Wars of the Roses a long time ago, but I have enjoyed reading what is in reality a detailed yet potted history of the Wars, their background, the key players and so forth culminating in a brief chapter on the battle itself. Is too much of the book devoted to everything except the battle? Not at all. I have to admit to a gruesome interest in the sections on medieval battle surgery and the analysis of the Towson grave pit skeletons and that of Richard III himself. Also of interest are the machinations of the French King Louis XI ‘the Spider’ as he attempted to interfere with the workings of the English crown. The book also includes some new or different interpretations of key players behaviour and incidents, such as the fence sitting of the Stanley’s. There are a host of contemporary illustrations, photos of re-enactors and of key locations such as the battlefield today, maps and diagrams and eight colour plates. The latter are mainly of banners of the key nobles, with a couple of ‘typical’ foot soldiers and one of Richards somewhat punctured skull. So, for the uninitiated and those with a passing interest this is a great and quite detailed introduction to the subject. A good start to a promising series.
By Colin Ashton - August 25, 2019