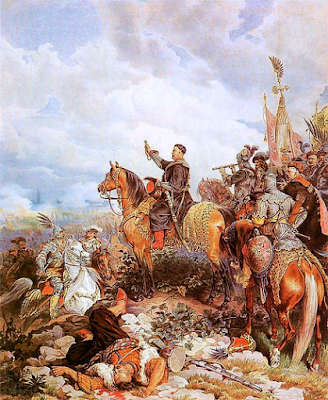 On a scorching Saturday this weekend I had some of "The Burrowers" over for a game. I'd been toying with the idea of refighting the Battle of the Kahlenberg as it more properly known for some time but didn't think I had enough Ottomans or Holy League troops. Wrong on the first count, because thanks to a recent acquisition and a painting spree by friend Barry I had just enough Ottoman troops, and wrong on the second as I was able to press into service enough suitable Germanic-looking units from my 1670s armies. The Poles were never going to be a problem as I knew I had more than enough! Problem solved.

Anyone wanting the background to the battle can click here but suffice to say a massive Ottoman army was besieging Vienna, albeit ineptly, while a hastily assembled yet well organised combined force of Poles, Hapsburgs, Saxons, Bavarians and other German states' troops was marching to relieve the city.

For the orders of battle I used what information I could find on line as well as in the excellent Osprey Siege of Vienna book. I also ruthlessly plundered info sent to me by fellow blogger Steve Jones who had fought the battle recently. We were using Pike and Powder, i.e. Pike and Shot, suitably amended to reflect the troop types and abilities in the campaign, with various house rules and bits of Black Powder II added. The real battlefield was dotted with villages and vineyards and intersected by a few streams, but with the exception of the ruined and fortified village of Nussdorf all villages have been omitted to ease the flow of play. Likewise the vineyards are for aesthetic purposes only. The wooded slopes of the Kahlenburg are also largely for show, and for sticking to T-shirts as players reached over them, will not slow movement other than for artillery which cannot enter.


There was quite a crowd involved in the game. Richard, Conrad Ian and Shaun took the Ottomans while Paul, Dave, Neil and Nigel were the Holy League. A game of possibly epic proportions and expectations was about to begin, and for plans on both sides to unravel at an alarming rate.

* if CinC orders his own command to move he cannot perform a re-roll for any commanders who fail their roll.

Paul and Nigel took subordinate commands in the German 'wings' until such time as the Poles arrived.