“Time to return to the Wars of the French Revolution” I thought. The next battle on my 'list' for the 1793 Flanders campaign was Famars, not far south of Valenciennes. It wasn’t actually that much of a battle but it interests me as HRH The Duke of York held an independent command of British, Hanoverians and Austrians tasked with attacking the south eastern part of the French army in their fortified camp at Famars, while one other large column and two smaller ones attacked at other points. The game will focus solely on HRH’s command (see below). 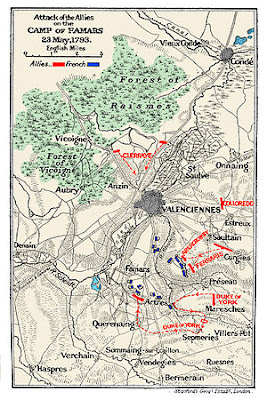 As you can see from the map York’s column made a lengthy detour to outflank entrenched French troops behind the Rhonelle stream, which were preventing him from attacking as planned. It was about now that York's 'minder' Austrian General Mack (YES that one) was wounded, leaving HRH to get on with things his own way. This detour took up several hours, by which time the main assaults had begun, and brought his column around to the south of Famars, and it was against this position that he made ready his attack. Or he would have had not GM Hohenlohe commanding the Austrian part of his command refused as his men were tired after the ‘exertions’ of their 5 mile march! So, apart from some skirmishing and a fierce little action when his British light dragoons found themselves behind some of the French emplacements, York waited until the next day, by which time the attacks of the other columns from the East had driven the French back towards Famars. During the night the French army slipped away, leaving Valenciennes to its fate. However, I’m assuming that in my universe, the young and inexperienced York overruled his Austrian subordinate and ordered an attack as soon as he arrived in position.

Overall the French were outnumbered by the combined Allied columns, but I decided/hypothesised that they could in all likelihood  have had a local superiority against York's column given the nature of their dispositions. Of course, quality was another matter, as the French were a mixture of former Royalist regulars (pretty good), National Guard (not bad) and volunteers (pants!). The cavalry were still pretty poor at this stage of the war but the artillery were good. The Allied column was made up of two brigades of Austrians (mmm?) and one each of English and Hanoverians. The English brigade included four battalions of the Foot Guards, while the Hanoverian one was made up of two of Guards and two of combined grenadiers. The cavalry were attached piecemeal to each of the brigades.

So on Saturday Jean le Rouge took command of the French (Lamarche) while Neil (HRH) and I (Hohenlohe) were the Allies.

Night fell at this point and it was also home time as Neil and John had to throw off their bicornes, fancy coats and big boots for more sombre attire so they could engage in Dad's Taxi activities when they got home. Looking at the outcome of the game and how it sat within the events of the full battle it was still a strategic victory for the Allies as the French army as a whole would be forced to pull back during the night, abandoning Valenciennes. Tactically however, the French did better than I would have expected and so called the game in their favour as a minor victory.

Valenciennes was soon under siege. When the city surrendered the population hoisted Royalist banners and pelted the garrison with all sorts of unpleasant things when they marched out with the promise of their liberty if they swore not to fight again for a year. I'm not sure I would have trusted them on that point of detail but this isn't 1793. General Lamarche was shortly afterwards removed from command but escaped the guillotine, retiring into obscurity. His replacement General Custine had a different fate in store but thats for another game.

As usual BP2 plus house rules for the revolutionary wars worked well, as did the random events cards that we used for the first time in a while. An enjoyable game I thought, even though my contribution as the Austrians was far from shining in glory.

For further reading on the events surrounding the battle click here . For an enjoyable novel covering the fictionalised events of the campaign and the sieges of Valenciennes and Dunkirk I can highly recommend this book available from Amazon. 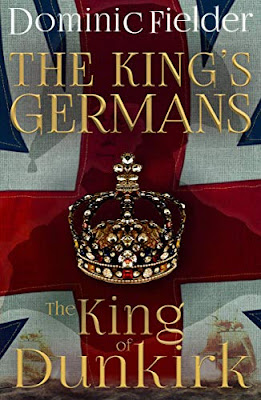