After no little planning I’ve kicked off a FRW campaign set in Flanders in late 1793. The Campaign Time (CT) start date is 1 September 1793, so after the fall of Valenciennes to the Coalition army and before the Battle of Hondschoote.  Quite a few of 'The Burrowers' are involved taking the part of French, Austrian, Anglo - Hanoverians, Emigres,  Dutch and Prussians.  There are also a number of so-called non-player characters some of whom are in fact played by friends dotted around the globe, so Carnot is in SW England, and Henry Dundas is in the Southern Hemisphere. I just need a volunteer to be Baron Thugut at the Court in Vienna. I thought that rather than chucking dice or deciding myself whenever something tricky, or of a political nature came up I could defer to these willing volunteers to make a decision. They could also generate new objectives (within the context of the campaign), interfere, and in the case of Carnot have unfortunate generals removed and tried for treason. The ‘removed’ player will come back as someone else further down the food chain and one his compatriots would step up as the next commander of the Armee du Nord until such time as they too made a mistake.

This is the very simple map of The Austrian Netherlands that has been issued to the players, showing the zones within which they can deploy. I’ve also given those manoeuvring around Dunkirk a smaller scale map of the area. Thanks to Domink Fielder (author of The King's Germans novels)  for the latter. 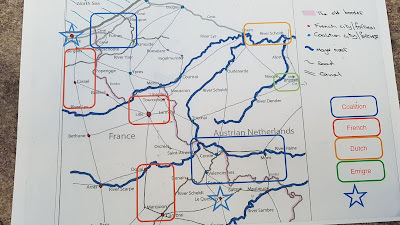 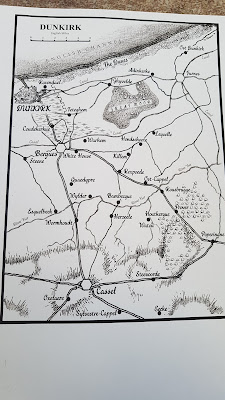 The background contex and initial objectives and OoBs have been circulated to the main players, and the two CinCs were asked to give me orders and deployment details for their commanders. All communication  from the French and Coalition CinCs  to their subordinates and up the chain to Paris, London etc go through me as I want to keep the identity of players a secret for as long as I can, which will stop people 3 days ride from each other speaking in 'real’ time at the pub, as if they would.

Why chose Flanders and this particular time? Well, the campaign is well documented and it is quite easy to find information on the orders of battle, well ok, up to a point. But there is an amazing amount of source materiel out there, in books and on t’internet.  Armies have been bath tubbed to reflect what I actually own and can put on the table, which is still scary as the opposing armies are still big (approx 180-200 units, or thereabouts). So, with so many colourful characters and troops whats not to like? Also, readers of this blog will know I've been running a series of FRW games at The Burrow and this is where we are up to chronologically. Irrelevant really but it gives context and a start date, 1 September 1793.

So, the French Armee du Nord is commanded by General Houchard, ably(?) assisted by Generals Pichegru, Souham and Jourdan.  They also have to put up with the interference of Lazarre Carnot and several Representative of the People. On the Coalition side the commander is Prince Josias of Saxe-Coberg-Saalfeld who also commands the Austrians, supported (?) by Clerfeyt and Kinsky. The Anglo-Hanoverians are under the Duke of York, the Dutch under the Hereditary Prince of Orange and the small Prussian contingent (before they get recalled by their government to partition Poland)  by General Knobelsdorf. Finally we have the Emigrés in the shape of the Army of the Condé, under the Prince de Condé of course, rabid reactionary counter-revolutionaries to a man who's sole aim is the overthrow of the Republic and the return of the monarchy. Should be interesting.

I won’t be able to report in great detail on the progress of the campaign without divulging too much information to the players, but hopefully there will be enough to keep your interest.