Another unit to be completed this month, although they were started in January (indeed some were prepped way back as I was going to paint them as FRW Venetians but thought better of it!). Grun Louden Freikorps was raised in  1790 in Luttich (Liege), originally of two battalions but by 1795 numbered 3500 men in three battalions. The corps fought through the Flanders and Germany campaigns, notably at Neerwinden, and was disbanded in 1798, the personnel being used to form one of the new Austrian regular light infantry battalions. 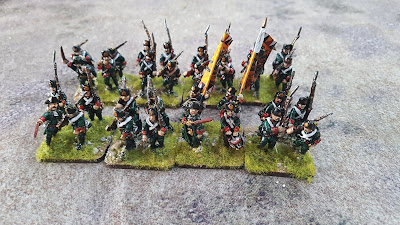 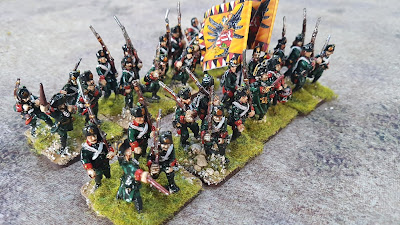 The unit probably wore ‘Hungarian-style’ trousers but I on.y had these figures with long gaitors so these will have to do. The figures are all Trent Miniatures and the variety of different poses is great, from marching smartly to ambling or slouching along, pipe in mouth. The flags are a couple of spares from Adolfo Ramos.
By Colin Ashton - February 20, 2020