Yesterday, John yet again very kindly piloted the drop ship on our annual trip to Vapnatark in York. We arrived very early but thanks to John's blagging and me looking all pitiful we were allowed in before 9.30 and went straight for a coffee. York is the first big show of the year in the North and while it never really changes its great to emerge from hibernation and see whats on offering to see who's around and can't walk fast enough to escape me in my trundlulator in stealth mode.

Here are some pictures of a couple of the games. These are the best off my phone and were not the only games (Lance and Longbow's Tannenberg and Grimsby's WW2 Russian to name but two): 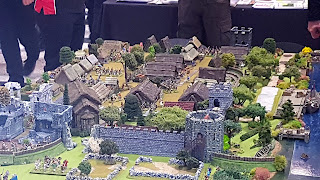 As for the negatives, or areas for improvement, here we go.....
Would I go again? Of course. It was a grand day out and a fine show. But no cheese eh Gromit?

Finally a very big thanks to John for the lift which was much appreciated.

UPDATE. I MESSAGED YORK WARGAMES SOCIETY RE THE
IFT ACCESS ISSUE AND SOMEONE GOT BACK TO ME RIGHT AWAY RECOGNISING THE PROBLEM AND COMMITTING TO TRY AND JIGGLE THINGS AROUND TO CLEAR THE ACCESS TO THE LIFT.
By Colin Ashton - February 03, 2020