A while ago I picked up a couple more bags of Northumbrian Painting Services 28mm Bavarians for the French Revolutionary Wars. These figures are cast wearing the horrible and wholly impractical Rumford uniform and they look great. I have four Bavarian battalions of them and a battery of cannon. However, this latest acquisition was made in order to produce a battalion of the Mirabeau Legion, which formed part of the Army of the Conde during the time of the War of the First Coalition. Click here for more info on Conde’s not inconsiderable little army. 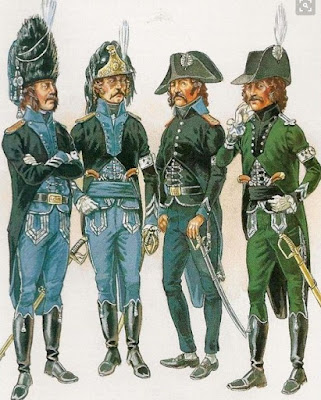 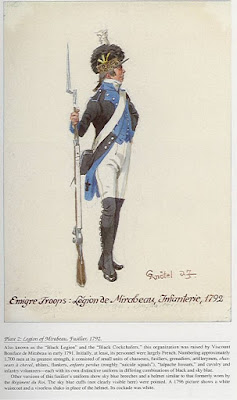 The Legion wore black with pale blue facings and breaches, a cracking combination of ever there was one. There are actually loads of illustrations of the Legion on the t’interweb showing a wide variety of uniforms (almost all with the same colours) but with different headgear. I already have a battalion painted up wearing Tarleton helmets but there are plenty of pictures showing them wearing the silly yet striking Romford helmet. 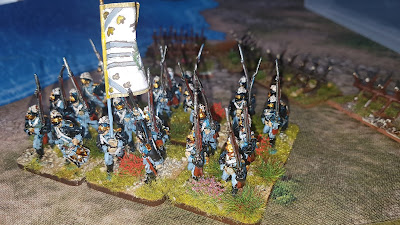 Figures painted and based by me. I also painted (badly) the flag. 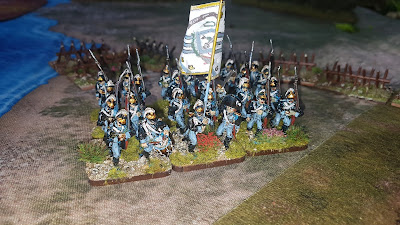 I’m going to have a further delve in the depths of the lead mountain to see if I can find a few more suitable figures to do a unit of light cavalry and maybe some chasseurs. Oh, and a battalion of grenadiers using up some FRW grenadiers that’ll look just like the man in the top picture.
By Colin Ashton - February 19, 2020