The War of the Waldensian Succession - 1669 in Piedmont-Savoy.

The War of the What? Well, its a fictitious conflict based on a small uprising of Protestants living within the borders of the Duchy of Savoy in the late 1660's. In reality it was crushed with ease but in my version of events the Waldensians were supported by Louis XIV of France, not because of any religious common ground but as a means of retarding the growth of the Duchy of Savoy on his southern border.    For an account of an earlier game set in this reality click here.

So, I had almost a full house on Saturday. John the Red, Conrad and Paul S were joined by  Roger from Bradford https://gapagnw.blogspot.com and Paul from Grimsby http://grimsbywargaming.blogspot.com.

Paul, John and Roger took the French, tasked with driving off the covering Savoyard force which would lead to the fall of the fictional (?) city of Citta Santa Menen-Disimulata before the Savoyards could be reinforced by Spanish who were marching to their aid from the East. Conrad and Paul were the Savoyards. I was the Spanish, who would arrive on the throw of a D10. I threw an eight so it was to be turn eight before they appeared on the Eastern table edge, which for reference when looking at the photos is the 'kitchen door' end of the room.

We used my own doctored version of Pike and Shotte, as the rules as they stand don't really work for the late 17th C.

The Savoyards deployed with all their horse on their left wing, with the three infantry brigades covering the centre and the front of the city. The French had the advantage of numbers and deployed all their horse facing the Savoyard and Allied cavalry. Their dragoons were on the left, initially tasked with crossing the river which they thought was fordable (it wasn't), which led to a costly but successful assault across the bridge.

The end result was a surprising (for me anyway) resounding victory for the French, but I will let the photos below tell the story. 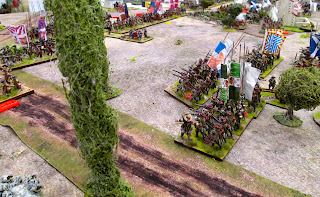 Well, that was actually quite tense. The Savoyards, especially their horse, performed well, but it was the loss of the massive cavalry melee in the centre that was the key factor in securing a French victory over them. The Savoyard cavalry were unlucky but many squadrons were newly raised, as indeed were many infantry battalions. The French too had quite a number of newly raised battalions but they were not really engaged.

Hopefully everyone enjoyed the game and for Roger and Paul R especially, their visit to The Burrow, but also Conrad who's command got well and truly minced. They did however get minced in style and the French cavalry ended the day with 30 per cent casualties (i.e. adding up the hits held by units at the end). Pike and Shot, or as I call the amended set, Black Shotte, are ok as like with Black Powder everyone knows the basic concepts, but they lack something when playing the mid-late 17thC. I'm sure I can come up with an alternative in the.

Probably be a couple weeks before I have another game here but I will be I hope back at the Durham club this coming Thursday where we shall be finishing the 28mm Napoleonic game we've been playing for the past two weeks.