On Saturday we picked up where we left off last week with this game. It had been building up into a decisive encounter for both sides. Could the outnumbered but largely superior forces hold off and critically damage enough French to force them to withdraw? Can the Coalition stave off defeat? Can the French win without crippling losses? These and other questions will hopefully answered in this post. To be absolutely honest, and because I am aware of the bigger picture in the campaign, I probably would have withdrawn the Austrians as quickly as possible, or not even made an attempt to sent reinforcements to Kinsky who could have been ordered to burn his baggage and stuff and leg it back to Courtrai. That, I knew, was never going to happen so there was going to be a cracking conclusion to the battle.

For a recap on where things were left last week, click [here], but to give a quick overview, an isolated and weak Austrian division had been caught by two very strong French ones from the front and the flank, with only a few reinforcements being available to the former. Rules General d’Armee. Comms via Skype and a fair wind.

I failed my GCE O Level Plate Spinning and Cat Herding exams in 1974 and never did get to resit the former.  I got a CSE Grade 1 in my Cat Herding resit. Years of working in the public sector gave me on-the-job experience of the latter as well! Consequently, I was rather busy facilitating the game and certainly missed a few key photo opportunities. The overall  number of photos are I hope sufficient to carry the narrative on in a way that makes sense to the reader. 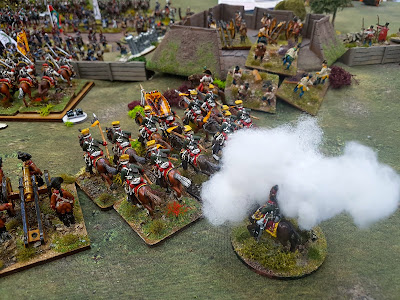 Fate was on the side of the French as a double 6 resulted in a ‘Destiny’ roll. The Austrian cavalry commander was killed by a howitzer shell. His brigade became faltering as a result.


So that was it. The battle started in the early afternoon, 1pm Campaign time, and closed as night was beginning to fall around 7pm although it wouldn’t be sunset until 8pm. I played out the extraction of the Austrians, which they managed masterfully although the cost of another battery of 12pdrs and three battalions of grenadiers who covered the retreat and a battalion of line infantry who were cut off. They also lost the camp, the bridging train and Kinsky was captured. The Austrians made it back to the safety of Courtrai in a sorry state with many units bearing heavy losses. Coberg had thoughtfully ordered two light cavalry brigades to support his force,  but they only arrived in time to assist in covering the retreat and this at least prevented the withdrawal turning into a rout.

The French had pulled off a well deserved (the planning carried out to get to this stage was impressive) if costly victory, but the Austrians had held on for 13 turns. Luck had indeed been on the side of the big battalions as they had been able to soak up quite a bit of damage during the battle, but the more flexible French, with more ADCs to play with, were able to swamp the Austrians with a numerical advantage of three to one in infantry and almost two to one in cavalry. It being a campaign, the boot could have been on the other foot regarding numbers available, but that’s where we found ourselves at the start of the battle.

The French have immediately to attend to a fracas two miles to the northeast, where a division of Dutch have been covering the flank of their force engaged in this battle. Most of Jourdan’s division was marching around the flank of the battlefield when it bumped into this Dutch covering force at around 4.30pm campaign time. With no reinforcements likely while the main battle was in full flow, Jourdan did what any self respecting French general would do and launched an immediate attack. This will be played out solo and by email next week as there are only a couple of players and few troops engaged. I also need a rest.

Back to the main event, the Austrians have pulled back to Courtrai to lick their wounds. The French have pursued, but not too closely due to a lack of fresh cavalry. Whatever else the campaign has proved challenging and provided some cracking games.

The technology. I was grateful for the assistance of my dear wife Katherine in setting this game up. I already owned a webcam and had bought another, but for whatever reason we ended up using one fixed webcam, a fixed wireless tablet and a roving wireless tablet. I had an earpiece and a microphone. There were a few hiccups but in the end the biggest issue wasn’t the hardware, the software (I used ManyCam and Skype through my Mac) or even the competence of the players and me in using the kit. It was the ability of t’internet to cope with so much activity mid afternoon on both Saturdays when everyone and their dogs were downloading movies to watch that evening. In Middlesbrough and Newcastle that certainly impacted on the game as the internet occasionally dropped off, and that buggered up the wireless connections we had between the various bits of kit in The Burrow. In fact for quite a few turns from 3pm onwards the players could only see stuff on the fixed webcam so relied on me to report on what was going on, much in the way an ADC might do in a real battle. As a means of accidentally creating the fog of war it worked well and everyone said it didn’t detract from the game but added to it. The players were all in agreement that the game had been completely absorbing and exhausting, as well as frustrating (hehehehehe). I thoroughly enjoyed the game, the second half more than the first. A great way to spend two Saturdays in lockdown.