I honest to goodness have had a very, very quiet week. Almost a fortnight even. That’s not to say I’ve neglected the hobby, far from it, but the next game I know I am involved in will be on Saturday 5 December (unless Conrad is running one of his Thursday afternoon mini games this week). Painting has slowed a little as my main job this past week has been to start another massive dig out of the box(es) of doom in time to put some surplus stuff on eBay in the run up to Christmas. So far there’s very little in the way of unpainted figures that have found their way into the Ebay box, which more than suggests that I’ve not really been ruthless enough. Guilty your honour, but there are mitigating circumstances!
Just about the only item I’ve actually finished is this Carraccio religious wagon for my Italian Wars Venetian army. The model is from 1st Corps, the figures are either Perry or Redoubt and the decals are also from 1st Corps. I made a mess of the decals for the banner so the Madonna is actually a trimmed down flag from Pete’s Flags. 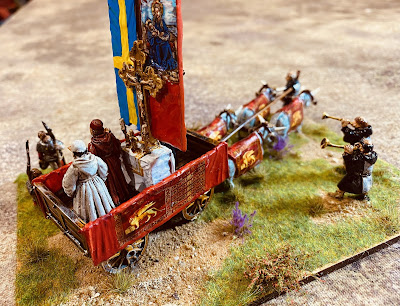 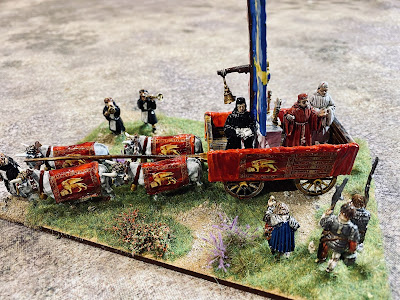 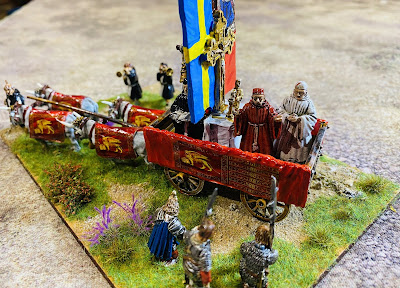 For reasons forgotten long ago I have another of these beasts which I’ll do for the Papal army, or maybe my Florentine’s.  I’ve been working on some 18thC French infantry and some commanders which will be done tomorrow I reckon. The plinths and columns for my Italian city have also been populated with a few bronze statues of Greco-Roman hero types, and a few more civilians together with a late Medieval/Renaissance  ‘band ’ are nearing completion.
By Colin Ashton - December 01, 2020