This report is a little late but the England v Scotland game on Saturday so depressed me that I took to my bed! Anyway. Last week’s engagement  truly was a game of two halves, well, insofar that (as we ran out of time on the first day) we fought it over two afternoons, Wednesday and Friday. At the request of the chaps it was another War of 1812 shindig. This time I decided on a simple encounter battle. The British needed to take control of the bridges and Buick’s Ford and drive the Americans from the field, while all (!) the Americans had to do was hold the bridges etc. and NOT get beaten. 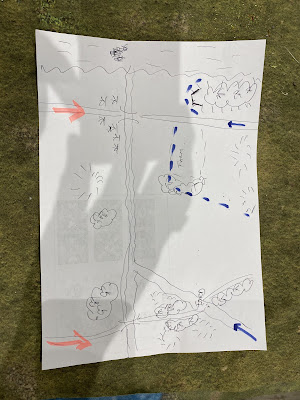 This is a rough sketch of the tabletop. Top of the map is the garden end. The British are entering on the left, the Americans on the right, each on one of the (randomly chosen) roads on their side of the table. Both commanders were allowed to chose a brigade to deploy on the table. Richard as the American CinC elected to put his Kentucky militia brigade in the farm area, with the US Rifles spread along the right flank, the 18pdr in the earthwork and the few cavalry at his disposal lurking behind the farm. The British, under Conrad and Paul, didn’t pick up the email about choosing a brigade, so I selected the ‘Light’ brigade on their behalf, entering on the road close to the lakeshore. Each had another, this time randomly selected, brigade that would enter on either of the roads. The Americans were unlucky and received their New York militia brigade. The British were more fortunate and were awarded their 5th brigade, comprised of HM 1st Foot, a weak battalion of Royal Marines, a battalion of Sedentary Militia and a few First Nations warriors. Oh, and a Royal Marine rocket section! These two brigades ended up facing each other at the other end of table as both entered on the ‘kitchen end’, about eight feet from the nearest other bodies of troops! The remaining troops would join the game, or not, on a simple die roll at the start of each turn. On a six a brigade would enter on THAT turn. On a five, the turn after, and a four the turn after that. Again, they could enter at either of the two roads, which one decided by another roll of the dice.


So, battle commenced. The British won the initiative and moved first. The Light brigade marched towards the river and bridge, reaching the riverbank by the end of T1, but suffered heavy losses from the Kentucky riflemen and the 18pdr. One unit, three companies of Canadian Select Militia fled.  The other British brigade failed to move. In the American turn, their New York brigade advanced boldly down to road and began to deploy into line, but over the course of the next three or four turns was to be shattered by the volleys of HM 1st Foot. Read on.....

At this point I realised that the American army had three shaken brigades out of five on the field so would be forced to retire. That was great news for the British as the final US regular brigade had entered the table at the kitchen end to replace the routed militiamen from New York. They would be easily contained by the British brigade positioned there, while the remainder of the British army, mostly regulars, was poised to force the river crossing, secure the bridge and drive off the now isolated infantry of General Scott.

It was obviously a British victory, but the game could have gone either way were it not for a serious amount of good and bad luck that benefited the British and really hampered the Americans. I enjoyed the game, and I think the guys did too. It was good to get all of my collection on the table, and even with the number of units on each side (15 or 16 or thereabouts) we still had acres of space in the central six or seven feet of the table. Any congestion was entirely down to the scenario and whims of the players.  It was certainly a less pressured game for me than previous day long battles that I usually offer. The remotely run games are now the new norm are quite straightforward to set up technologically speaking, but still require a great deal of energy by the umpire to keep the momentum going over such a much longer time span.

So, good game, Black Powder II are fine and I’m happy with the tweaks to the troop characteristics and stats but I can’t help wondering what this period would be like using General d’Armee. Richard suggested giving them a try, so we might just do that next time. And half day games are good too.