“Cannon Played from the Great Fort” A review 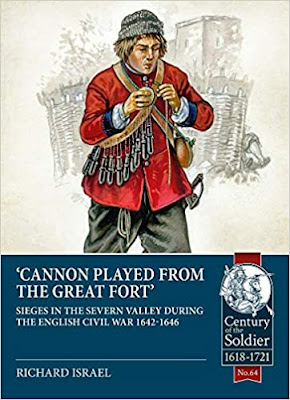 I promised to review this and two more new Helion books in an earlier post. Here is the first.

I like to keep count of the number of books Helion have published in their various series; in this case ‘The Century of the Soldier’ and this book is No. 64. “Cannon Played from the Great Fort” yet again fills a gap in the readily accessible information and knowledge we have on the tragedy that was the English Civil War. The major battles of Marsdon Moor, Naseby, Edgehill and the like have been done to the proverbial death but little, to my understanding at least, has been written about the numerous sieges which took place.

This book focuses just on sieges the undertaken in the Severn Valley, of which there were many, great and small. After an introduction into the science and practice of siege warfare during the mid-17th century there are chapters on each of the years 1643, 1645 and 1646 (there were no siege operations in the region during 1644). The conduct of the sieges of Bristol (1643 & 1644), Gloucester (1643), Shrewsbury (1645) and Worcester (1646) are each described in great detail, supported by contemporary correspondence and records. These chapters do a splendid job building up to the penultimate one which is a well-reasoned analysis of Royalist sieges versus Parliamentarian ones. I will leave the reader to judge which if any side outperformed the other; suffice to say it makes excellent reading. Finally the conclusion contains interesting sections on the overall strategy, and the key technological and intellectual defensive and offensive tactics that were developed and used during the war in the Severn Valley.

To conclude, this is yet another triumph for Helion and author Richard Israel. The subject has clearly been researched deeply and the book is well written and easy to read. Illustrated throughout with 30  photographs of the surviving fortifications, key buildings and landscapes as they are today, 13 reproductions of contemporary drawings and 10 really useful maps, all of which help our understanding of the period and the sieges under analysis. An excellent addition to the series.