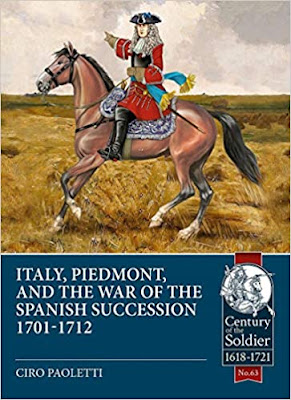 Here’s another review I promised to do as soon as I had read the book. No 63 in Helion’s Century of the Soldier series is another of those books that I don’t need but just had to have and find a space for on the shelves. I’ve got collections of Piedmontese troops for the last quarter of the 17thC as well as for the French Revolutionary Wars so an area of interest and potential expense for sure.
‘Italy, Piedmont, and the War of the Spanish Succession 1701-1712’ by Cairo Paoletti does what its says on the cover and does it well. The best thing about this book is that it covers one of the secondary but strategically critical areas where the war was fought; one that seems to have been overlooked by English-speaking authors until now. This was a theatre where the Allies, Britain included, sank vast amounts of money and resources into, and it is a story well told.

The book follows the well-tried and tested Helion format, and takes the reader through the 11 years of the war covered by the book, starting when Piedmont supported the French, then from 1703, when they switched allegiance to join the opposition until the cessation of hostilities. If you are after detail then you won’t be disappointed.

As ever the book is lavishly illustrated with a large number of contemporary black and white pictures as well as 16 central pages of specially commissioned colour paintings showing the dress of not only Piedmontese troops but those of the Papacy, Parma and Tuscany, and details of the flags carried, all by well-known artist Bruno Mugnai. Furthermore there are some useful maps and the uniform guide chart is helpful as it shows the coat and facing colours for each Piedmontese regiment of infantry. Personally my favourite colour plates are those showing the dress of soldiers from Parma, Tuscany and the Papal States.

In summary, this is a well researched and richly detailed and illustrated study of the Piedmontese army and the campaigns in Italy. Helion often have a titanic task translating and editing work from non-English speakers but this book was certainly a most enjoyable read, and as such I can recommended it highly.