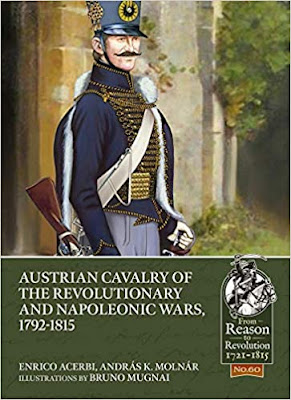 In the absence of any gaming here at the Burrow and a slow down in painting (or at least completing) figures I've been able to review yet another offering from Helion and Co.

A great deal has been written about the subject of the book, and I have a fair bit of it myself. However authors Enrico Acerbi and Andras K Molnar are to be commended on an excellent and thorough ‘refresh’ of the subject, using many new and previously unpublished non-English language sources in this impressive, new and weighty publication from Helion and Co, the latest in their successful ‘Reason to Revolution’ series, (Number 60 no less). Again, Helion and series editor Andrew Bamford should also be commended for stepping out of the box with another excellent and well researched book authored by non-native English speakers, which is not without its risks.

The Austrian army was in a state of almost constant warfare against the French throughout the Revolutionary and Napoleonic Wars. For all its perceived lack of success on the battlefield and the poor performance of many of its leaders, the army was actually a well trained and disciplined force. This was especially true of its large mounted arm, regarded, respected and feared as among the best, if not the best, in Europe.

I like the straightforward and direct approach adopted by Helion in almost all their publications. The book begins with an introduction to the Kaiserlich und Koniglich (K und K) army at the start of the Revolutionary and Napoleonic Wars and takes us through a brief history of Austria’s involvement in the ongoing fight against the French. It then gets into the nitty-gritty of the subject and the rest of the book is a detailed exploration of Austrian cavalry, the different types, (for example Cuirassiers, Dragoons, Chevau-Leger, Uhlans and Hussars), beginning with its organisation, tactics, recruitment and training (of men and their mounts) and the glittering array of uniforms. The latter section is especially well detailed, and, as well as covering regular regiments includes many of the Freikorps units raised at times throughout the wars.  The information presented is for the most part neatly tabulated and all is easy to follow.

We are then given a detailed regimental history for each cavalry regiment, including their Colonel ‘proprietors’ and their commanding officers, as well as where they were recruited, stationed in peacetime and the campaigns and battles they were involved in.

The book is illustrated throughout with many contemporary black and white images, but the central colour plates by Bruno Mugnai are, as one would expect from such a talented artist, gorgeous. For lovers of lists and tables, the one appendix is a comprehensive and interesting list of the names of Austrian army and general staff officers and the appointments they held.

For anyone interested in the Austrian army of the period, and especially the cavalry, this is should be as welcome an addition to their library as it is to my groaning bookcases.