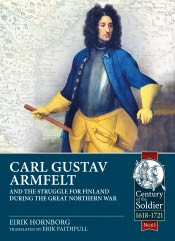 Another masterpiece courtesy of Helion & Co. is upon us as the latest in their ‘Century of the Soldier’ series in the form of “Carl Gustav Armfelt and the struggle for Finland during the Great Northern War”
This is a fascinating and utterly absorbing account of the life of Armfelt and his role in the Great Northern War. Especially so as it unlocks the stories of the brilliantly executed but ultimately doomed campaign in the defence of Finland, and later the ill fated Norwegian campaign.

This is a scholarly piece of work, very detailed, well written and equally importantly, the translation is good. Despite the original being published nearly 70 years ago it doesn’t feel at all dated. The author Eirik Hornborg (1879-1965) was a prolific Swedish author and military historian, and the original book was published in 1953. The book is part a biography of Armfelt and part a meticulously researched account of the war. That Armfelt campaigned where he did means that we are fortunate to get an in depth analysis of the war in Finland and later in Norway. I am not aware of any other works in English that focus on these campaigns; most stick to the major battles against the Saxons, Russians and Danes, and of course Charles XII and Poltava, so we are presented with a refreshingly different perspective.

The book benefits from some excellent maps of the areas of operations and battles, as well as a colourful eight page centre section. I particularly like the images of the battlefields as they are today with the deployment of troops superimposed over them. The remaining colour illustrations are of portraits of the main players, plus a number of paintings of the battles and photos of existing battlefield memorials. In addition the book is copiously illustrated with black and white photographs or contemporary paintings and drawings. Best of all however are artist Maksim Borisov’s lovely pen and ink drawings of troops in action.

So, this is surely a must for anyone who has an interest in the Great Northern War. Highly recommended.
By Colin Ashton - March 22, 2021