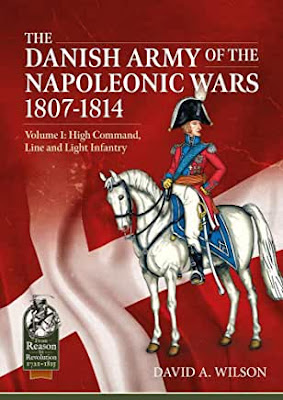 The Danish army of the Napoleonic Wars is not a widely written about subject, in English at least; it is certainly a niche area of interest. Enter Helion, and their ‘Reason to Revolution’ series, with Volume 1 of The Danish Army of the Napoleonic Wars 1801-1814 by David A. Wilson. This is the first of three volumes on the Danish army by the author, who has researched his subject thoroughly.

This little volume covers the uniforms and organisation of the high command and of the line and light infantry. After a brief introduction covering the background to Denmark’s involvement in the wars up until their surrender in 1814, there is an interesting chapter on recruitment, terms of service, weapons and training.

The bulk of the book is a detailed description of staff and infantry uniforms, regiment by regiment, illustrated by 23 very colourful and useful original pictures of the uniforms of each regiment, equipment, rank insignia, weapons and 19 pages of regimental flags. These pictures really make the book stand out and make understanding the uniforms of the Danish troops covered in this volume straightforward.

The book concludes with a number of appendices, covering among other things, the battle of Koge against the British in 1807 and campaign of the the Danish Auxiliary Corps in northern Germany in 1813/14. Other appendices include a discussion on Danish military music, the personal kit of your typical Danish infantryman and on Danish army rations (yum,  not).

Overall then, lots to commend this book about. Certainly, and not just for students of the Napoleonic Wars, it gives a fascinating and detailed insight into the army of one of the lesser known players. 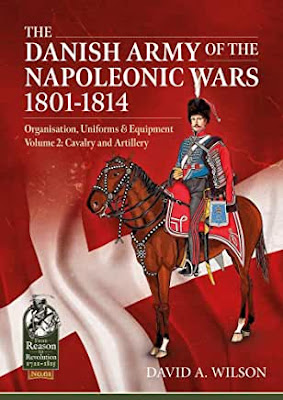 This second volume describing the Danish army of the Napoleonic Wars 1801-1814 by David Wilson takes an almost forensic look at the uniforms, organisation and equipment of the cavalry and artillery.

IT IS EVEN BETTER THAN VOLUME 1!

Helion have yet again published a fascinating book on a particularly niche subject, but a subject that deserves to be explored by anyone with an interest in the Napoleonic Wars. As one might expect there is next to nothing written on this subject in English, so this series is most welcome. The Danes may not have been a major player but they certainly fought above their weight during 1813-14 in northern Germany. They also have the benefit of having an army with very colourful uniforms.

This volume follows the same format as the previous one, and after a brief introduction launches straight in to chapters on each of the different types of cavalry in the army; the Horse Guards, Heavy Cavalry, Dragoons and Light Cavalry and Hussars. There’s even a section on the Bosniak lance-armed squadron that was attached to the Hussars. The best bit of the book for me has to be the chapters on the artillery, engineers, sappers, the bridging train and the many different types of ordinance used and the organisation and set up of a company of artillery, including limber arrangements and so forth. Not forgotten are the many coastal artillery formations.

As with Volume 1 the book is very well laid out and a pleasant read, packed full of original artwork by the author, with 54 lovely colour plates, depicting the uniforms and equipment of each regiment of cavalry and of the uniforms and cannon of the artillery, engineers, the bridging train and pioneers. There are also depictions of the flags carried by the cavalry and of many of the range of cannon available to the Danish armed forces.

This is an excellent book and clearly a labour of love by the author. I can only sit and wait patiently for the third volume to be published.