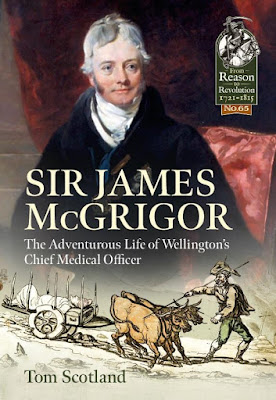 Wartime medical services, especially those in place at the end of the 18th and start of the 19th centuries are a subject of almost ghoulish interest for me, fuelled further by my wife’s great, great, something, Grandfather who was a contemporary of McGriggor who also studied medicine at Edinburgh and served in the Peninsular War attached to the Portuguese army as a physician, and later as an Inspector of Hospitals, so there is every chance that the paths of these two men crossed at some point.

This book is subtitled “The Adventurous Life of Wellington’s Chief Medical Officer”, and what is described is quite an exceptional and certainly adventurous man, who was dedicated to his life to his profession and the welfare of the men under his care. He was to shape the British army’s medical services for decades to come. We follow McGrigor’s early years, then his service in Flanders, the West Indies, India, Egypt, Walcheren, and the Peninsular campaign, (during which he was captured but escaped en route to France, avoiding all attempts to recapture him until he was able to escape by fishing boat into the hands of one of the Royal Navy’s blockading squadron - definitely suitable materiel for a movie). McGrigor was a prolific note taker, and kept meticulous records throughout his career, which culminated in his position of Director General of the Army Medical Services, a post he held for 33 years until his retirement at the age of 77.

The author Tom Scotland is a surgeon and author of a number of other books on military surgery, and this book is without doubt a well researched and written account of McGrigor’s life, and makes an absorbing and enjoyable read. There are a large number of black and white plates (mostly contemporary portraits) and some useful maps. The appendices whet the ghoulish interest I referred to earlier, for example describing all causes of death in hospitals in the Peninsular between 1812-1814 and a fascinating nomenclature of diseases encountered by McGrigor during the same campaign.

This is another excellent publication by Helion & Company, and a worthy offering as part of the growing “From Reason to Revolution” series. A fascinating subject and a remarkable man. I would not hesitate to recommend it to anyone with an interest in British army medical services during the French Revolutionary and Napoleonic Wars, or of the wars in general.