I hosted a game on Saturday. Suvorov in Switzerland: The Battle of Altdorf, 25 September 1799

It’s been a few weeks since I last laid a game on for the Virtual Burrowers, due largely to me struggling with a spike in the nerve pain I get in the back and all points south as a result of crumbling vertebrae No’s L5 and L6. 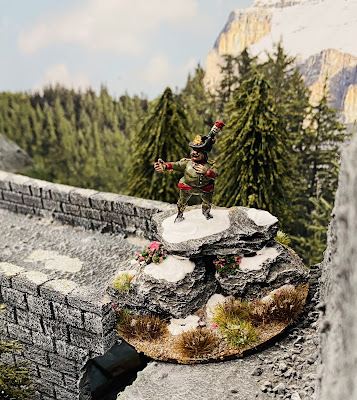 Anyway, as I was back to my 'normal' I took the guys to a remote Alpine valley in late September 1799 where the Russian army under General Alexander Vasilyevich Suvorov encountered a French blocking force intent halting the Russian withdrawal from Northern Italy through Switzerland to join with General Rimsky-Korsakov in Zurich. This plan would change when Korsakov's army was defeated outside Zurich on 25/26 September. Surrounded by the French, and having to struggle through high mountain passes in atrocious conditions, Suvorov’s army was to fight and win 12 battles in 17 days as they marched through Switzerland, loosing a quarter of their army, yet they reached the safety of Upper Germany while skilfully avoiding the closing net of vastly superior French forces.  Conrad, Paul and Neil were the Russians while Richard, Shaun and Mark took the French. We used Black Powder 2 with my usual house rules, as they are by far the easiest set to use (as the host) when running a game using Skype and live streaming through multiple cameras. (The way it works means that each player can chose which camera to use rather than me having to switch each time someone wants a different view). 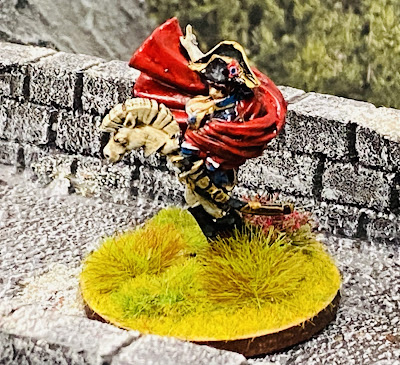 The Russian objective was simple. Cross the fast-flowing creek (impassable to artillery and cavalry) and capture two stone bridges and the village of Altdorf, all located on the French baseline. Altdorf was the destination of the main Russian supply column, which was marching there by a different route, and was due to meet up with the main body of the army, so the area HAD to be cleared of the French!

The Reuss river is impassable, as are the wooded mountains and the two rocky outcrops. The woods are classed as heavy. The fields and orchards provided light cover for troops within their boundaries.

What the French were unaware of was that the Russians would be reinforced by a small Austrian force of four large but lumbering battalions which would arrive sometime from turn 2 onwards from the mountain pass to the East.

We agreed that the Russians were the undoubted victors. Mark’s French brigade was broken with over half its units destroyed. Shaun’s brigade was buckling and Richard’s reserve were getting the better of the Austrians so would maybe be in a position to finish them off before the Russians could, should they chose to, intervene. With no cavalry to speak of the Russians wouldn’t be able to mount an effective pursuit, and that wasn’t their goal anyway.
Historically the Russians held off the French long enough to meet up with their supplies, but after learning of the defeat of Korsakov at Zurich, were then forced to divert to the high snowbound alpine passes in order to avoid the closing French net. Ten battles and ten victories later the survivors reached the safety of Upper Germany and the start of the long march home.
By Colin Ashton - March 31, 2021