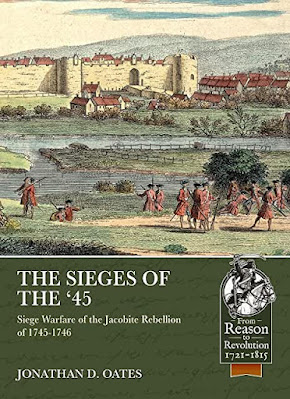 The chaps at Helion have published a great new work on siege warfare during the Jacobite Rebellion of 1745-1746, a copy of which dropped on my doormat a few days ago.

This is by far my favourite of author Johnathon Oates’ books; indeed it is pretty much my favourite book on the ‘45 Rebellion. Why? A generalisation perhaps, but all of the books I own on the subject, or I’m aware of that have been published, focus on the campaign, the politics, the battles and the personalities, but none just on the sieges, and in such detail. As we learn from this latest from Helion and Co’s Reason to Revolution series, the number of sieges were actually greater than the number of battles in the open, so plenty to go on.

This all makes a refreshing change and an enthralling read. The book describes the background and progress of each of the sieges in great detail, enlivened in part due to the existence of a great deal of contemporary correspondence, which is cited in the book; in my mind something that always brings a subject to life, if only for the amusing spelling and grammar.

Not that there is an issue with either of those of course. Far from it. This book is well written, clearly referenced, and copiously illustrated, in both black and white and in colour, the latter being photographs of the places described in the book as they stand today. There are also a number of really clear and useful maps.

All in all this is an excellent new book which deserves a place on your book shelves if you have an interest in the ‘45 Rebellion. Highly recommended.