Another quiet week plugging away in the Burrow but more units off to barracks.

I don’t know where the days go, but on Thursday  I was so absorbed in ‘stuff’ that I was convinced it was Tuesday, and the weekend just teleported into my path rather suddenly. The result is that so far I’ve not actually finished anything I’ve done myself this week. I got some basing completed though.

Last Saturday I ran a game, which I will post a very late account of in a day or so. Then on Wednesday I played in a game of Warlord’s Victory at Sea rules system using Richard’s ships. The Germans had to sink the Allied convoy without either of their capital ships being crippled. I have to say the rules are easy to pick up, and whilst a little simplistic, do give a good game, so thanks Richard for an entertaining afternoon. 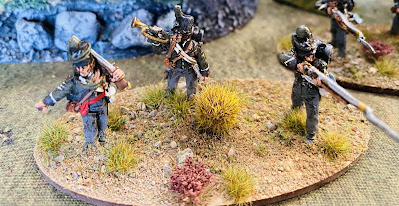 I should be in a position to finish the basing several units of Late Romans and Goths over the weekend, as well as another War of 1812 Canadian unit, Caldwell’s Rangers, all five figures of them! They get to play with the First Nation’s warriors.