War of 1812 - a small reinforcement for the British

I decided to paint up a tiny unit of Caldwell’s Western Rangers to add to my War of 1812 collection, primarily to take their place along my First Nation warriors, and added them to an order for Knuckleduster figures I’d placed with their UK distributer Caliver Books. Now, Knuckleduster miniatures are on the pricy side but I do like them; certainly more than Foundry and about the same as Old Glory.  Luckily the War of 1812 is limiting as it was by European standards little more than a large skirmish, so I don’t need that many miniatures. Like I would ever head my own advice. 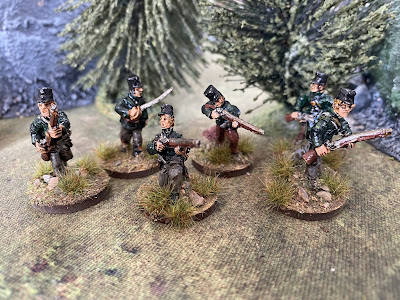 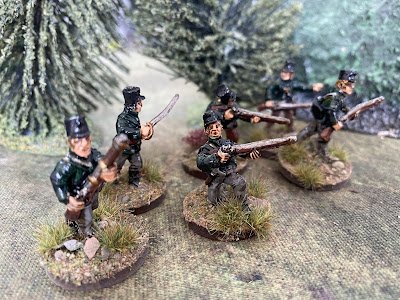 This is from Wikipedia: Known as Caldwell's Rangers, after their commander, noted Loyalist and Indian trader William Caldwell.The unit was a rather small one, probably not more than fifty men. Nominally organised as two companies, they often worked in conjunction with the Indian Department and fought dispersed alongside the Indians (chiefly the Ojibwe, Wyandotte and Pottowottomi). The unit, or parts of it, fought at the Battle of Moraviantown, the Battle of Longwoods, the Battle of Lundy's Lane and in several actions on the Niagara peninsula.

I’m looking forward to seeing them on the table sometime soon.