More goodies from Helion. ‘In the Midst of the Kingdom’ by Martyn Bennett. 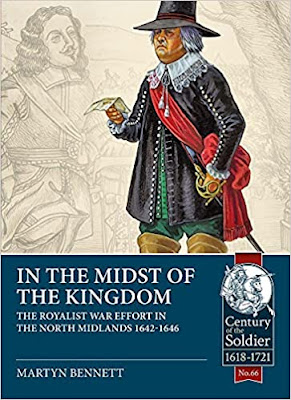 ‘In the Midst of the Kingdom’ is the one of the most recent books from prolific publishers Helion & Co. Part of the ‘Century of the Soldier’ series the book follows the previous pattern adopted by Helion with most of their publications  on the British Civil,Wars, and again focuses on a narrow geographical area, but digging deep, and in so doing providing a rich narrative and analysis of the Royalist war efforts in the North Midlands during the British Civil Wars between 1642 and 1646. I must admit I like this approach as the world has probably seen enough generic broad-brush histories of these wars (ok, if not the world perhaps, then just me). It has certainly raised my interest levels in this sad war to a level witnessed by my expanding library on the subject.

This is the perhaps surprisingly the first time the subject has been covered from the Royalist perspective, and what we have is an almost forensic investigation of the campaigns and the officers and regiments forming the Royalist army of the North Midlands. The book is a positive gazetteer of those who took part, something I always find of great interest as the information on so many individuals helps in understanding the conduct of the war. Helpful too for any budding genealogists perhaps? Indeed the level of detail is commendable. We are presented with an exceptional and interesting account of the war effort, the army, its regiments, organisation and administration and its ultimate demise, making the book a fascinating and informative read. Well written, exhaustively researched it is presented in a way that lifts it from being just a long list of soulless facts. The maps are helpful, especially for anyone not familiar with the geography of the region.

I enjoyed the book and have no hesitation in recommending it to all those with an interest in the English Civil War. The cover artwork by Patrice Corneille is as ever superb and has an almost Mona Lisa quality about it. Reminds me of someone too.

Note to self. I have absolutely no desire to wargame this period.