The Forcing of the Linth Valley, 1 October 1799

Very late posting but it can’t be helped. Last Saturday I hosted another game here at the Burrow, aided by Richard and Conrad who risked their safety, liberty and bank balances had the COVID police been aware of the ‘gathering’.  That said I had the garden doors and skylight windows open and a medical grade plasma wave air purifier thingy was running, so reasonable precautions were in place. Paul, Neil and Shaun joined via Skype and watched the game as it was love streamed by each of my three cameras. The figures are all mine from a variety of manufacturers, but mainly Eureka, Elite and Trent. The mountain guns are Cran Tara. Rules used were Black Powder II with my usual house rules, mainly swapping the turn sequence around so shooting comes before commanded moves.
So, another game from Suvorov’s campaign in Switzerland in 1799 was set up. In reality this battle took place a few days after the engagement at Altdorf, the game played two weeks ago. (Click Here to read post). Suvorov now knows for certain that Zurich has fallen to the French under Andre Massesna, and the Russian army of Rimski-Korsakov he’d been en route to join has been crushed. Suvorov's only escape route for his army was now to climb through the high snow covered mountain passes, and it was vital that the army was able to secure the Linth valley in order for them escape the closing net as French troops strove to encircle and annihilate his army.  Gripping stuff indeed!
The battle, like all of them during this little alpine episode, is quite small. Both sides were pretty evenly balanced in infantry (around dozen each), with the Russians having one or two more battalions than the French, but the French had a regiment of Chasseurs a Cheval to counter the Russian Cossacks and a battery each four and eight pounders opposed to the dozen or so pretty useless one-pounder mountain guns of the Russians. Over half of the Russian army were grenadiers or Jager, while the French were all veteran formations. Both sides had troops on the table at the start, with the bulk of their forces hopefully joining over several turns. For the Russians there was also a chance that all or part of their reinforcements would arrive at the optional entry point. Richard and Shaun were the French while Conrad, Neil and Paul were Russians, so without further ado, here is what happened. (Did I say there was a ten turn limit before it got too dark to fight? We forgot anyway). 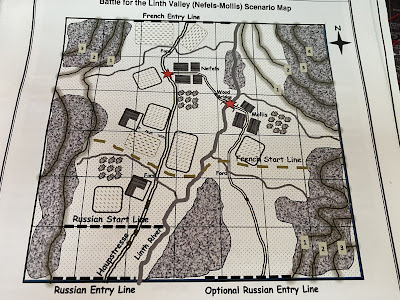 From “Suvorov in the Alps”, by Tom Garnett. Superb book if you can get it. Six scenarios plus lots of background.

The game was great fun and I survived it thanks to the presence of Richard and Conrad who moved the troops, leaving me free to manage the game and the kettle. It worked well (the game that is, although the kettle worked too).