John and I braved the ice and cold to make the 40-odd minute trip down to this, the first show of the year for those of us in t’north. I had a really good day but the highs were balanced by a few negatives; my opinions only I hasten to add and like I said, I had a great day out.

So the good things:
1. I contacted the organisers and arranged to jump the queue to avoid having to stand (which makes my back kick off and spoil my day) and because of the cold. We arrived at about 9.20 and were met at the door by the cheery Chairman of the York club no less and escorted into the building, making for the cafeteria. I get in free as I’m 60 but John was also allowed in free as my ‘carer ‘.
2. What little I had on my list was all preordered so there was no mad rush to belt around the floor. It would all still be there later. After John went off shopping I sat and chilled for a while, watching the world go by.
3. I met up with loads of mates and acquaintances from all over the country and probably spent more time talking to them than I did trundling round the show.  It was good to catch up with the lads from Like a StoneWall (some of them might come up to the Burrow for a couple of days in the summer) and, as always my old friends from the Durham Club, together with Douglas, Graham, Charles G, Charles S, and more. I had been hoping for a longer chat with Robbie, John and Neil of the Independent Wargames Group but it wasn’t to be.  The chance to speak to friends.for.most.of the time  was by far the best bit of the day.
4. Barry from the Like a Stone Wall group brough me several boxes of French War of the Polish and/or Austrian Succession cavalry, all ten regiments, plus two of Imperial Cuirassier for my 1670s/80s collections. Very nice they are too.
5. If I had brought a shopping list then there was no shortage of traders, covering everything most people could possibly want.......except perhaps winged monkeys 1870s Bolivians.
6. The vast majority of people were very friendly and polite and gave way to me when I was trying to negotiate the rather tight areas between games and traders.

Less good stuff:
1. The venue has a lift for disabled punters and those with reduced mobility, but the exit from it onto the 1st mezzanine floor opened out in the middle of a trade stand so getting to and from it necessitated running people over, knocking heels and shins and other tactics when the more usual ‘excuse me’ failed to get any response. A wheelchair-bound person might have got a little annoyed and justifiably so.
2. I’ve yet to find the disabled loo after many years of attending. I’m sure there must be one but.....
3. As mentioned above, it was very crowded in many areas and impossible for me to get around through or over due to the press of bodies. I didn’t even try to negotiate the tabletop sale for example as there was no way could have got round easily with my walker.
4. The games were nothing special. In fact the games I saw on the ground floor bore a striking resemblance to previous years’ offerings and there was an element of deja vue by, e.g. a nice Back of Beyond game and an equally large ECW game with a harbour looked very similar to the same clubs’ games located in exactly the same places at the 2018 show. I’m not knocking the quality of the games, and they looked pretty good amd wouldve taken some effort to stage but some new blood or ideas would be good. I’m also sure I missed some games as I remain convinced that I couldn’t find one of the floors shown on the map. Obviously it was there somewhere but the satnav on my trundler is on the blink. (It did find the bar however).

Now a photographic interlude. I didn’t take many as there weren’t that many games to take pictures of but here they are. 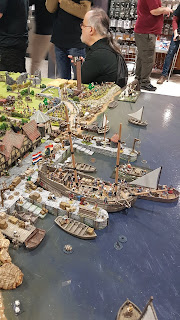 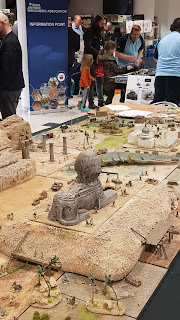 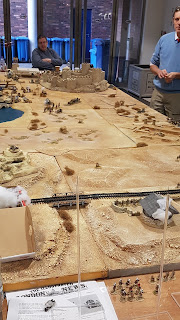