The 'good' thing about 1793 is that there aren't that many battles that are 'wargameable' in my chosen areas of operations (Flanders and the Rhine) for the current series of games. This 'clash' north of  Valenciennes and west of the fortress of Condé was the precursor to the battle of Famars and later the capitulations of Valenciennes and Condé to the Coalition forces. Rather than regurgitate what happened in May 1793 I recommend you go here for a full account of the events leading up to the battle, its aftermath, and the battle itself.

Dampiere the French commander, already mistrusted by the 'Committee' as he was an aristocrat, was between a rock and a hard place, as if he didn't try and relieve the pressure on Condé by breaking the Allied cordon he would no doubt be recalled, tried for treason and executed in very short order. However, despite the French having a slight numerical advantage the Allies were regular troops, some of whom had seen a fair amount of action, while the Army of the North was made up of enthusiastic but brittle volunteers supported by a core of regulars. Furthermore, following the defeat at Neerwinden, the army had witnessed the defection of their commander, Doumouriez, together with Miranda and the Duc de Chartres, to the Austrians.  I have an order of battle for the Allied army but that of the French is largely fudged, as indeed is the terrain. The battle is  noteworthy for the fact that this is the first time that British troops were in action against the French in Flanders since joining the 1st Coalition. 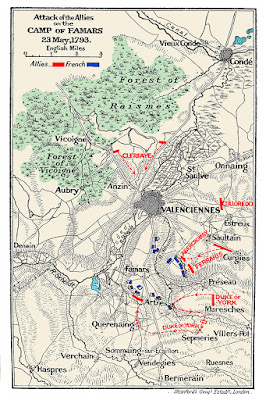 Ignore the troop annotations on this map as they are for the later Battle of Famars a couple of weeks later. Condé (top right) is under siege and a long cordon of Allied troops stretches westwards as well as further east. The centre of the Allied position is the village of Vicoigne. The battle of Raismes takes place in the hilly and wooded area north of Valenciennes, the French objective being to drive a wedge through the Coalition's cordon at Vicoignes and northwards off the map at St Armand, thus splitting them in two. French attacks will come from the south, through Aubry, Anzin and north of Valenciennes across the river at St Sauve.

Hopefully the game won't turn into the slugfest that we experienced with Neerwinden. To lighten the mood I will be using my newly-created random event cards. More of those in a separate post.
By Colin Ashton - February 22, 2019