Fighting the French Revolution. The Great Vendee Rising of 1795 review. 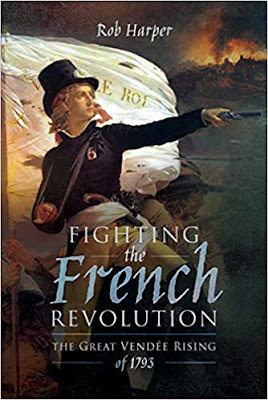 As promised a couple of posts ago, here is a brief review of the above book.  I was quite excited when I saw it was due for release and ordered it straight away. I thought it would be either very good or that Iwould be left wanting for more information. Well am glad to report that in my opinion it is a very good book. Clearly well researched with loads of primary and secondary sources, the majority of which are French. After the introductory chapters which include sections on the region, it’s geography and it’s people there are sections on the Royalist  Vendée and Republican armies. These include information on organisation and, especially interesting for me as I need to think carefully how to incorporate Vendée troops into my battles and work up some stats for Black Powder, sections on tactics employed.

As for the rest of the book, it follows a chronological, day by day or week by week order of all the events, clashes and engagements that together almost toppled the Republican government, but were put down after much hard fighting with a ferocious level of unbridled savagery by the Republic. There are plenty of maps which will be handy for those of us who like me will no doubt be playing a Vendee game sometime soon, and a few pages of B&W photographs. I would have preferred more of the latter.

The book finishes with biographies of all the main players from both sides in the rebellion together with some orders of battle of the Republican and Royalist armies at various times during the campaign and a pretty extensive bibliography (see my earlier comment). This book compares
favourably with the 1975 Banners of the King by Michael Ross which first sparked my interest in these events 44 years ago!

9.5 out of 10 (the need imho for more photos being the only reason it didn’t get a perfect 10). When I get home from our jaunt I must now finish the 40-odd Vendée peasant types I still have in the painting pile.
By Colin Ashton - February 17, 2019