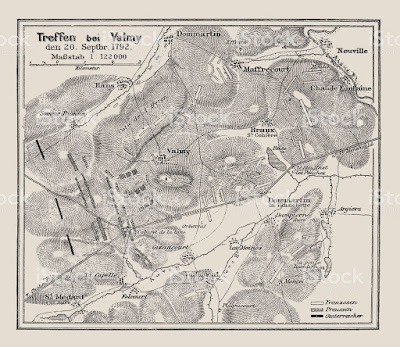 Saturday morning and the Battle of Valmy began. Steve reprised his role as Dumouriez while Shaun was Kellerman. Conrad and Paul changed their white uniforms to blue to become the Prussian commanders. Paul was Brunswick and Conrad was Hohenlohe. Unlike in the real action the Prussians would not be retiring after a brief 'cannonade', and with the French firmly across their lines of communication would certainly be attacking. The French didn't really need to attack but elected to advance on their right to try and tempt the Prussians forward (not that they needed any tempting) while the centre would hold. Their extreme left was supposed to advance, but that didn't happen.

Without further ado, what follows are rather a lot of photos showing how the game developed. Hopefully the captions will give an indication of how it all played out. 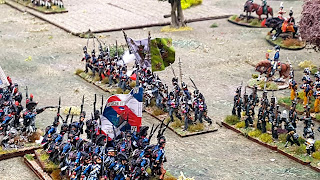 Wow! What a dust up. I knew it was going to be a hell of a game before it started and I was not disappointed. The French had won a tactical and technical victory sorts but were so badly damaged that there was no way they'd be able to stop the Prussians withdrawing or marching round their flank to reconnect with their lines of communication. The Prussians had lots of shaken units as well as a few that broke and ran, but the French had the opposite, with a good dozen broken units, including six out of nine regular battalions and half their artillery.

I must commend the guys for playing the period and not the rules throughout, in several instances refusing to perform 'gamey' moves as that would have been downright ungentlemanly. I thought the game flowed well, and everyone prefers the change to the turn sequence as it livens things up and adds yet another thing to think about when pushing your toys around the table. Black Powder still works for me in this period but I'd still like to go back to General d'Armée sometime, or try something new.

Looking at the wreck of his army after the battle Brunswick may well have regretted his gut feeling earlier in the day that "We don't need to fight a battle here today".
By Colin Ashton - February 10, 2019