“Louis XIV versus the World” OR The Wars and Soldiers in the early reign of Louis XIV, vol 1 The United Provinces and the Netherlands 1660-87

As promised my thoughts on one of the latest from Helion & Co. They’re certainly on a roll this year with so many exciting new titles hitting the book shelves. Thus one is right up my street as I have pretty extensive armies for this period. 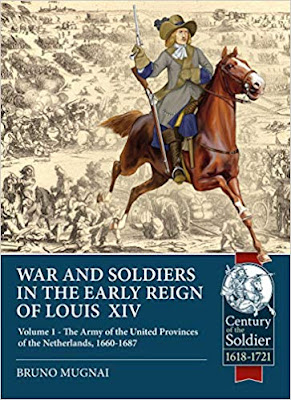 A superb start to a new series! Bruno Mugnai has done it again filling a previously annoying gap in my knowledge of the Dutch army of this important period of history, yet another chapter in the “Louis XIV versus the World” saga. While we have plenty of information on the Dutch army of William III at the time of the Glorious Revolution through to the end of the century, this new book provides a fascinating and detailed insight into the development of a ‘national’ Dutch army in the years pre dating William’s accession to the British throne. Chapters cover in great detail the organisation of the Dutch army , it’s experience on campaign against the Bishoprics of Cologne and Munster, the Second Anglo-Dutch War and the Franco-Dutch War 1672-78 against Louis XIV of France, the Bishop of Cologne, and for a time Charles II of England in the Third Anglo-Dutch War. We also get some very useful information on unit organisation, commanders, uniforms and flags, as well as orders of battle. Most of this information has as far as I am aware never been presented in such a clear and comprehensive way before and the author’s obviously rigorous research is supported by animpressive bibliography. As has come to be expected with books from Helion, this one is loaded with 86 black and white pictures, many of which are contemporary prints, three maps and twelve glorious colour pages of flags and uniforms penned by the author himself. If this is the standard being set for the remaining seven books in the series then I await them in great anticipation, especially anything on Munster and Cologne who hit big in the late 17thC. My troops are near enough so I do NOT intend to repaint or reorganise any of them!
By Colin Ashton - March 03, 2019