As promised here are my thoughts on the first of Helion’s new releases this week.
SUPERB! Need I say more? 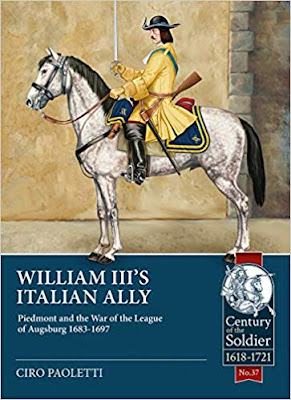 This book covers a much overlooked or forgotten theatre of operations during the Nine Years War.
For William III having an active alliance with Piedmont threatening the south eastern
borders of the arch-enemy France was critical to his war aims. The book covers in great detail the background and build up to the conflict and the importance to the Piedmontese King of being able to use the war to lift the country into the same league as the 'big' players. As well as a brief history of the Duchy of Savoy and it’s Ducal House, there is a chapter on the ‘campaign’ against the Waldensians, a Protestant sect I had never heard of, who were forced to either convert to Catholicism or leave. They chose to leave but not without some fighting against Piedmontese and French forces which was to result ultimately in their near extermination. I digress.

This work also examines the nature of warfare during the period before describing the
composition of the Piedmontese army. The war itself is covered in great detail, focusing on the campaigns in Piedmont and Italy. The book is lavishly illustrated with many (105) black and white pictures, three maps and fourteen glorious colour illustrations of uniforms and flags of the Piedmontese army. The author has clearly carried out a great deal of research, including many primary sources in Italian, as is evident from the extensive bibliography. Another highly
recommended publication from Helion, bringing a little known aspect of the War of the League of Augsburg into the limelight. As the owner of a fairly large Piedmontese army for the period this book is great news, even if my infantry regiments shouldn’t be equipped with a pike element after 1682 as Victor Amadeus ordered their withdrawal after they proved to be useless in fighting the Waldensians in the Alpine passes. Am I bothered? No, and any button counters out there be damned!😜
By Colin Ashton - March 01, 2019