I am now almost happy with the amendments that have been made to 'Pike and Shotte' to better accommodate the 1660's to the 1680's. The attached might hopefully be of interest, the first being the stats used for the game. Click on the picture to embiggen it. 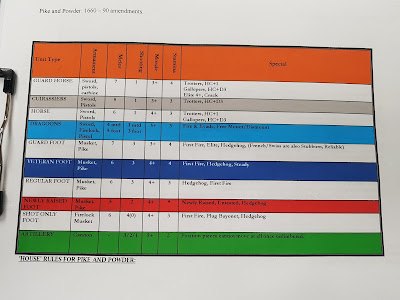 One aspect of the rules I'm still not happy with is the inability of 'trotting' cavalry (i.e. those who rely on firepower) to countercharge when they are still able to initiate a charge, which seems a little unbalanced and gives whoever gets their charge in a massive advantage, as we saw in this game when the French Maison du Roi (trotters) went through the Imperial cuirassiers like a knife through butter. For the next game I'm going to try out giving 'trotters' two shooting dice instead of one, which ought to increase the number of times one or both sides in a cavalry melee are disordered. Furthermore I shall remove the +1 to hit charge bonus, so neither side gets one. The defending side also moves into contact at the same point that they would if counter charging.  'Gallopers' will still get the charge bonus so should still get a slight advantage in melee. Or not....

One aspect that both sides overlooked in the last game was that cavalry armed with pistols and carbines, so have limited (but potentially very useful) shooting capabilities. Ok, a 6" range isn't much but get a fews six's thrown and mayhem could well result.

Next are the 'house' rules used for the Grolla Dell'Amizizia game. 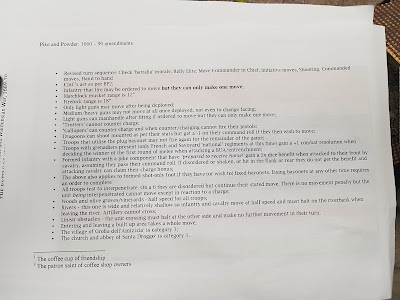 Apart from the few odd changes discussed above these remain unchanged from the game. There's nothing significant in these other than the different turn sequence, which again proved to work very well.

As always these are a work in progress.