Easter Egg Hunt! Back to the Vendee inspired campaign. The Battle at St. Landry

Followers of my ramblings will remember a long series of Vendee-inspired games that I ran as part of a mini campaign from around 2017. Since the last game sometime in 2018 I’d become distracted with other stuff, but last week, with a game due to be held on Saturday, I decided it was high time to get the troops back on the table and hopefully bring the campaign to a conclusion, for now at least. Readers may remember that the expedition had been forced to evacuate after failing to capture St. Nazaire, and that with the exception of a small force holding the fort at Le Croisac, the army had successfully re-embarked. Wishing to have one more attempt at encouraging the Catholic and Royal Army to continue its uprising the commander of the expeditionary force the Comte d’Hervily, managed to convince the Royal Navy to land his army south of Nantes, which they did, depositing his few thousand Emigres supported by English troops at the town of St. Landry. The French Republicans were forewarned and sent a strong division to drive the counter revolutionary scum and their English allies into the sea.

As it was Easter Saturday I thought I’d incorporate an Easter Egg hunt into the game. Why not? I even had some 28mm bunny rabbits dotted about the table. Mini Easter Eggs were hidden at various key locations on the table, e.g. under bridges, inside buildings. Whoever was the first to occupy these areas ‘won’ a mini egg which they were at liberty to eat. Conrad was British, Richard commanded the Emigrés and Paul and Shaun were the Revolutionary French. Richard's command and the English light dragoons were deployed along the ridge beyond the river in the photo above. The English/Scots were still forming up on the beach, and the promise of some Chouan insurgents was dependent on how good or bad things got for the Coalition forces. I will as usual let the captions accompanying the pictures tell how the battle unfolded. Suffice to say it didn't go quite as I had envisaged, but thats one of the joys of a wargame. 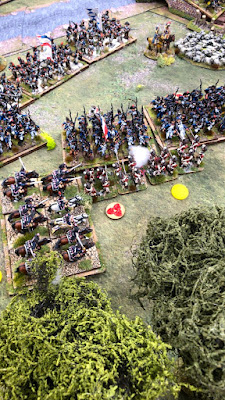 Well that was it. We called time and declared it a close tactical victory for the Coalition army. However, the  Coalition forces were in no position to exploit their limits success and were contemplating re-embarking and going home. No sign of the Chouan reinforcements that were supposedly on their way. Hopefully the Coalition weren't relying on their arrival too much!

As for the Republicans, they'd just run out of steam having almost broken through on their right. Their conscripts had done pretty well with only two battalions breaking. The Republican army withdraw back over the river to reform and lick their wounds while reinforcements had the opportunity to arrive and stragglers rejoined their units. Another attack would be necessary if the commander was to avoid a one-way trip to Paris and an appointment with the Committee of Public Safety.

I hope everyone enjoyed the game. I did. It didn't play out as I had thought, insofar that the coaching inn should have been ignored while the army drove around it and through the Emigré troops before the English and Scots arrived. I certainly didn't expect them to loose their field artillery in such a dramatic manner.

Going back to the Easter Egg Hunt, Paul and Shaun bagged the most eggs, even using subterfuge to nick the eggs placed among the English baggage.
By Colin Ashton - April 21, 2019