Today's offering is two regiments of Sikh regular cuirassiers! Most of the cuirasses were apparently shipped out from France by one of the French soldiers of fortune in Sikh service, with the remainder being produced locally. I have no idea (a) if they really wore this uniform/armour in the heat of the Punjab, but maybe they did as the Gorchara were equally burdened with chainmail and assorted other bits of tin, or (b) whether they ever actually fought in any of the ferocious battles of either of the Anglo-Sikh Wars. But who cares? The castings are again by Studio Miniatures and their woodenness (is that a word) is growing on me as the whole point of this collection was to have a shiny toy soldier-looking pair of armies. I'm being unkind as I have always been a big fan of Irregular Miniatures 28mm figures which are possibly even more wooden than Studio Minis but nonetheless very appealing. 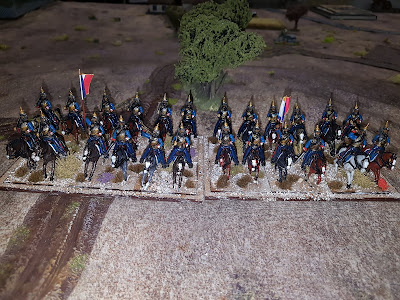 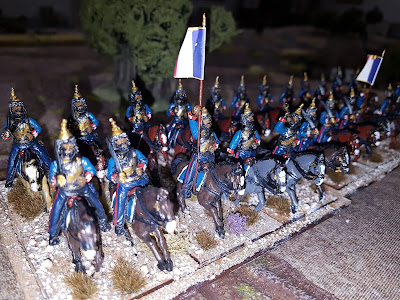 Tomorrow if i can get the bases done  there will be two regiments of Sikh regular lancers. Not much to say here. I have a game tomorrow; Ottomans v Poles. Should be fun.
By Colin Ashton - April 05, 2019