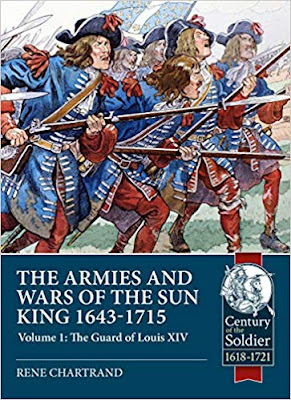 Another great book dropped onto my doormat last week courtesy of Charles Singleton. I have to say that the Century of the Soldier series from Helion just goes from strength to strength. This stunning book is yet another highly anticipated volume from the talented Rene Chartrand, the first of what I understand will be a comprehensive series covering the French army during this period. Volume 1 concentrates on the Maison du Roi, or Guard, of Louis XIV, starting with the political and military situation found in France on the death of Louis XIII and the rise of the young Louis XIV to supreme command of army and state. Amongst the numerous campaigns described (from the start of Louis’ reign till 1671. Subsequent years will be covered in the next volumes) and of particular interest to me are the sections on France’s involvement in Portugese independence and the wars against the Ottomans in Hungary and Crete. The bulk of the book includes chapters on the command of the army, biographies of the main French commanders, details of their own household troops, orders of chivalry and of course the uniforms, equipment and campaigns of all the various troops that made up the Guard. There are a number of appendices, the most useful of which is the one describing one of Louis most dogged opponents, the Spanish army of the period. The book is literally stuffed full of lots of contemporary black and white illustrations and maps and of course, as is to be expected from books from this series, 32 pages of colour plates, including five pages of specially commissioned artwork by the talented Ed Dovey. A highly informative and pleasing read and one I can recommend for anyone interested in the early wars and armies of a Louis XIV. Roll on Volume 2, and the rest.