While a furious battle was being fought five miles south of Courtrai, another one was developing around two miles to the northeast of the Austrian position. Earlier in the day the Dutch had made a reappearance having spent the past seven days in Ghent. Still reeling after their defeat outside Menin on 1 September they managed to put together a scratch force to send to the aid of Coberg at Courtrai (and to their own Dutch garrison). They had departed Ghent on 7 September and by 9 September were a few miles from Courtrai, just in time to get drawn into the battle developing between the French and Austrians. As you know from earlier posts the Austrians had fended off an attempt by the French cavalry to encircle their small force, and  these reinforcements (led by Coberg in person) had cut their way through to go to the aid of the greatly outnumbered Kinsky. The Dutch were instructed to place themselves approximately two miles off  the flank of the main Austrian position to guard against a further outflanking move. This they duly did, albeit under observation from French light cavalry. However by 4pm they were aware of a French force approaching from the southwest which without pause swung into a furious attack against their positions.


This is only a small action so I didn't want to waste a Saturday playing it, nor was the game really big enough for the usual five or six players, so in the end I briefed the commanders and requested detailed (or as detailed as they chose) instructions from both, and decided to play solo to get the game out of the way. What follows is an account of the action. It  was very easy to follow the instructions given to me.

In terms of troops involved, the Dutch fielded eight battalions, mostly of recruits due to their recent defeat and large proportion of replacements,  plus two small battalions of combined grenadiers, in three small brigades, two companies of 6pdrs, some Jager, and a brigade of four weak regiments of cavalry and dragoons that were still each carrying four hits from the battle on 1 September.  Jordan's slightly less weakened division was attacking with eight battalions of infantry  (two demi-brigades and two battalions of volunteers), two companies of foot artillery (8pdr and 4pdr), and the residue of his cavalry brigade in the shape of the Hussars du Mort and a company of 4pdr horse guns.  The whole was screened by the usual swarm of skirmishers. The missing units of his division (a further brigade of infantry and his heavy cavalry) were involved in the battle simultaneously taking place a couple of miles away. 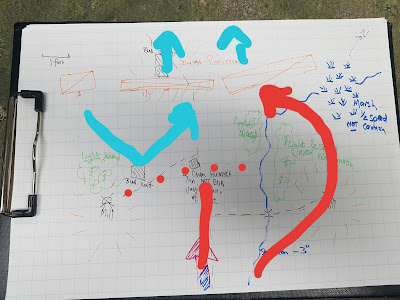 Jourdan clearly had a weakness in cavalry so sent over half of his infantry across the stream to attack the left flank of the Dutch. Both foot companies deployed in the centre by Le Chien Humide Inn.  The horse guns and hussars wouldn't have stood a chance against even Dutch cavalry in those numbers so accompanied the right-hand infantry attack.

Jourdan had already been in action and when I tested to allocate his command ability he was classed as superior. The Dutch commander was on a minus 1 to start with for being Dutch and having suffered a defeat and resulted in being deemed to be a blockhead. {NB I test for CinC ability each time they are in action and adjust the score with modifiers based on their past record, giving a nod to preconceived national characteristics and way the person playing in character behaves for the purpose of the campaign narrative.  This explains why the Austrian Kinsky was hors de combat in the previous battle. Everyone has bad day.}


A pretty conclusive victory but it has to be said that the French won the initiative every turn and made  excellent use of that significant advantage. They also carried out textbook column assaults against flaky enemy troops in line. The Dutch also threw the worst ever series of dice in memory.

Here is the after action report from Jourdan delivered in person to Houchard. [Ed. We have fact checked this report].

“General
I have the honour of presenting you with a total victory as I led my division into the teeth of enemy cannon. [Fact Check: Jourdan didn’t lead his men but spent the battle ‘directing’ his artillery in the centre]. Our forces have driven the Hollanders from the field in complete disarray in a matter of two hours! [Fact Check: combat began some time after 4pm and did not end until approaching 7pm, not including some mopping up and pursuit, so closer to three hours]. The 13th DB supported by our cavalry and a battalion of volunteers, using the woods as cover and crossing the stream, charged the enemy left as soon as they were able while the 83 DB and our artillery held the centre. [Fact Check: the cavalry and the 83 DB actually failed to advance as ordered]. The first battalion of the 13th was forced to retreat in the face of enemy grapeshot but of the others, one charged the enemy line, which failed to stand. The battalion behind was also forced to retreat [Fact Check: they only retreated following a short but vicious melee], and the entire enemy brigade withdrew. The 13DB again took the initiative and charged two more enemy battalions, this time in the flank. Again, both battalions failed to stand and so another brigade was forced to retreat, abandoning their guns. [Fact Check: the gunners initially escaped with their cannon but were later forced to abandon them].

Our artillery performed well, although the cavalry were at first unwilling to close with the enemy. [Fact Check: the French artillery’s performance was with the exception one particularly well laid salvo, below average, and the gunners played safe. The Hussars du Mort were so anxious NOT to suffer Mort that they hung back until the outcome was not in doubt]. The latter however did chase down the retreating enemy infantry and artillery, and were only forced to pull back when faced by large numbers of Dutch cavalry that was belatedly covering the retreat. Two small battalions of enemy grenadiers were unable to escape the field and, taking refuge in the hamlet of Stinkenhondendorp, were later forced to surrender. [Fact Check: The grenadiers actually had to force the French to take them into captivity rather than the way it has been reported. It was only when the French were looting the village that they even noticed the Dutch seeking refuge there].
The enemy cavalry were badly placed and unable to close with the 83rd DB due to the closeness of the terrain, and our skirmishers kept them at a distance, causing some casualties. [Fact Check: four very flakey and weakened cavalry regiments made up largely of recruits were little real danger to an entire Demi Brigade safe behind thick impenetrable  hedgerows]. Despite the best efforts of my men, the Dutch horsemen were able to cover the retreat of the remains of their infantry, but could not save the artillery nor the rearguard. [Fact Check: The Dutch cavalry effectively prevented an active pursuit, largely because there was in fact no pursuit!]
Apart from many prisoners, including a General of Brigade, we have captured 5 enemy colours and 12 cannon. [Fact Check: there were roughly 436 prisoners, of whom 407 were in the two weak grenadier battalions, the ‘general’ was actually a colonel and was badly wounded. The references to colours and cannon are correct]. The losses among my division were negligible. [Fact Check: True apart from one battalion of the 13DB that lost 50% casualties foolishly attacking a Dutch battery. The 83rd DB and the cavalry were barely close enough to the Dutch to get fired at, let alone take any casualties].
Vive la France!
Jourdan”

I can now finish off the admin for 9 September and send up to date strength returns to the various commanders before they decide upon their options for 10 September.