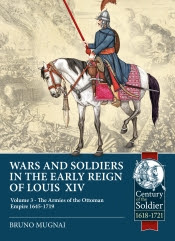 What a stonker! THE definitive work. There are insufficient superlatives in the English language to describe this masterpiece. No one need write a book on the Ottoman army during the reign of Louis XIV again, ever. If they did I doubt anything  could knock this book off it’s deserved place as the No.1 ‘go to’ book.

Why? It’s well written and an engaging read. I read it in one sitting of several hours in the garden and like a previous book I’d read about Velcro just couldn’t put it down! The colour plates depicting a range of soldiers in parade and campaign dress are gorgeous and informative The dozens of black and white illustrations support the text extremely well,  and there are some really useful maps, ranging from the ‘at a glance’ map of the whole Ottoman Empire, regional maps and some great battle maps. It is well referenced as evidenced by the bibliography.

As for the actual content, we get a well researched description of the workings of the Empire, it’s strengths and many weaknesses, and its relationship with the European powers. I found the chapter covering the different regions and ethnic groups found within them especially interesting, for example how they contributed (or not) to the Empire and the very detailed sections on each of the different troop types available, how they operated and their various strengths and even rates of pay are a boon to any wargamer.

No book on this subject could overlook the campaigns undertaken during the period, especially against the Ottomans’ long-time enemy the Republic of Venice, the Polish and Lithuanian Commonwealth and of course the Hapsbergs. In relation to the latter Bruno has written a detailed account of the famous Siege of Vienna and the Battle of Khalenberg when the Ottoman besieging army was crushed and Vienna saved. It is all stirring stuff! I shall be dusting off my Ottoman army and getting the late 17th century units from the lead mountain to paint up and joins the ranks. I’ve already done the relief of Vienna but might do it again now I have more information.

As you might have gathered from this, I rather like the book and recommend it most highly as a must for anyone with even a passing interest in the Ottomans.