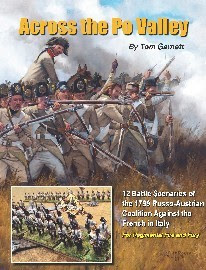 This is all I know about the above book so far but thought it worth a heads up. I have ordered a copy off Caliver and am looking forward to getting it next week.Wargaming the Late French Revolutionary War / – Scenario book covers the lesser-known campaign where the successes of Napoleon Bonaparte in his brilliant 1796-1797 campaign were wiped out in 1799 by an equally brilliant campaign led by the Russian hero Marshal Alexander Suvorov. Twelve battle scenarios, ranging from northeast to southwest northern Italy, tracks the sweep of the Russian-Austrian coalition against their French opponents. Each scenario comes with a detailed battlefield map, a complete order of battle with unit labels, and special rules and content you need to set up and play each game
By Colin Ashton - June 28, 2020