Guerra Fantastica. The Portuguese Army and the Seven Years War 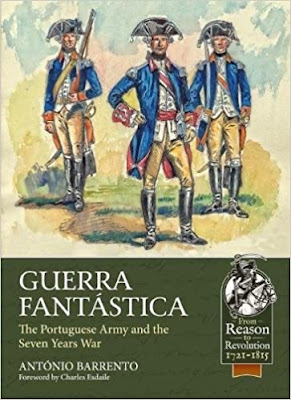 I knew nothing about the involvement of Portugal in the Seven Years War beyond the fact that they were on our ‘side’, fought against the Spanish and didn’t have much of an army. This book is a little gem and an excellent subject for what is the 50th publication in Helion’s ‘Reason to Revolution’ series. I’m grateful to Andrew at Helion for sending me a copy to review.

The author is a recognised expert on Portuguese military history and this book is an English translation of one originally published in Portugese earlier this year, but with a new forward and some updates to the text. A niche topic if ever there was one, there wasn’t actually a great deal of fighting between the Portuguese, led by the Count of Schaumburg-Lippe and a number of British and German officers seconded in to the Portugese army. However, this book goes into great detail explaining how Portugal fitted into the bigger geopolitical map of Europe, and how the conflict began in Portugal. We get an honest account of the deficiencies found in the Portuguese military, and how some (but not all) of these were overcome, and of the involvement of a large number of English regiments sent to reinforce what was a woefully inadequate Portugese army.  There is a useful order of battle for the whole force as it stood in 1762 which must be of interest to any war gamers wanting to dip their toe into the campaign. The campaign in northern Portugal against the Spanish invading troops is described in detail, and is supported by a couple of useful maps and many contemporary black and white and colour illustrations, plus some lovely colour plates depicting soldiers of the Portugese army.

A niche subject certainly, but one that is explained well and should be a good buy for anyone interested in the  Seven Years War. Highly recommended.
By Colin Ashton - June 23, 2020